What follows is a brief introduction to the Bents’ extensive and productive explorations of the African continent in the 1890s predominantly, divided into their 5 tours (see the interactive map): 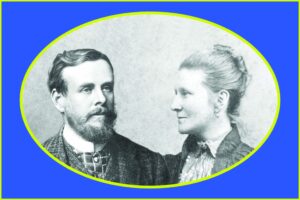 “Mr. Theodore Bent, the traveller, is naturally one of the men of the hour. Sit with him at his comfortable place in Great Cumberland-places (says the Morning Leader), and you will hear more about Mashonaland and the Matabele than you could hear from any other man living. Mr. Bent declares, however, that he is not an explorer or an adventurer; he is an archaeologist, and it was his passion for archaeology that drove him to Mashonaland. But why to Mashonaland? Well, we know enough now to convince us that Mashonaland was once the resort of the Phoenicians, and that in the country are to be found remains of many cities of moment. Mr. Bent does not claim that Mashonaland was the Ophir of Solomon, but he does believe that the people who built these great cities were Semitic – no doubt attracted thither by its gold reefs. Mr. Bent had a rough time in the country. On one occasion fourteen of his party of sixteen were attacked by fever; but Mrs. Bent – a brave, heroic woman who laughs at the discomforts of exploration – ministered to their wants with sweet, sympathetic care. Mr. Bent is an enthusiast, and he speaks as a seer. He peers into the future and perceives the day when we shall have the free Republic of the United States of South Africa. (From an interview given to the ‘Morning Leader’ in October 1893 and widely syndicated in England, e.g. Supplement to the South Wales Weekly Argus and Monmouthshire Advertiser, Saturday, October 28th, 1893)

The well-to-do but contrasting homes of two of Queen Victoria’s subjects set the scene for this introduction to the sequence of African journeys made (mostly) in the 1890s by the British explorer-archaeologist (antiquarian) Theodore Bent, and recorded by his wife Mabel, at the apogee of Empire. Theodore’s researches in Greece and the eastern Mediterranean lay behind him, his significant Arabian expeditions were to follow, and Mabel chronicled every arduous mile – from 1883 until his death, aged 45, in 1897.

Their two family homes elegantly present the couple’s different (although both affluent) backgrounds. The Bents over several generations were successful business people (potters and brewers in the main) and Theodore grew up in Baildon House, in the village of the same name, not far from Leeds, and very much within those industrial zones that generated Britain’s huge wealth at the time. The ruddy-black brick chimneys of the north of England, and his childhood, were always visible in his mind’s eye – in the following lines from as far away as the Zimbabwe plains.

From his gateway and dale tops of home, this was Theodore’s smoky view. Mabel, in the years before her marriage, away to the south-west, across the Irish Sea, and from the bridge over the Slaney in Newtonbarry, County Wexford, saw things differently and invariably in green. Newtonbarry, with its large and verdant estates, was home to the land-owning Hall-Dares from the 1860s – Mabel moving there from Sligo with her two brothers and three sisters when she was in her teens.

The Bents were in business, the Hall-Dares in land, and these backgrounds and large houses, provided Theodore and Mabel Bent with the independence they needed, as newlyweds in 1877, to set out and continue on their twenty-year programme of ‘archaeological’ investigations, which included a year in Cecil Rhodes’ Mashonaland (Zimbabwe) examining the bewildering monuments there. This work in 1891 at ‘Great Zimbabwe’ forms both the centrepiece of their African journeys, as represented by Mabel’s Chronicles, and of Bent’s career as a whole – for Theodore it marked the highway to southern Arabia and the final researches of his short life.

Ten years after her husband’s death, from malarial complications developed east of Aden, and fifteen after their sensational (and controversial) work in Mashonaland, the widow of J. Theodore Bent could still command a place in the oft-consulted Anglo-African Who’s Who and it remains a succinct fanfare:

‘BENT, Mrs. Mabel Virginia Anna, of 13, Great Cumberland Place, W., and of the Ladies’ Empire Club, is a daughter of Robert Westley Hall-Dare, D.L., of Theydon Bois, Wennington Hall, Essex, and Newtownbarry House, Co. Wexford. She was married Aug. 2, 1877, to the late Theodore Bent, of Baildon House, Yorks. Mrs. Bent accompanied her husband in all his explorations, and took part in the excavations with which he was associated in the Greek and Turkish Islands, Asia Minor, Abyssinia, the Great Zimbabye (Mashonaland), Persia, and elsewhere. She is the authoress of ‘Southern Arabia, Soudan, and Sokotra,’ compiled from her own and Mr. Theodore Bent’s notes.’

[NOTE: The extracts in the links at the top of this page are all taken from: The Travel Chronicles of Mrs. J. Theodore Bent. Volume II: The African Journeys Mabel Bent’s diaries of 1883-1898, from the archive of the Joint Library of the Hellenic and Roman Societies, London (Archaeopress, Oxford, 2012). The references to the material cited may all be found there.]