The idyllic beach at Kera Panagia is said by many to be the most attractive on Karpathos with its crystal-clear waters and the beautiful church of the Panagia perched on the heights above.

But how many visitors know the legend of the origins of the church and the tragic story of the hermit monk, Vasilis, who looked after it?

In 1885, Theodore and Mabel Bent spent 6 weeks on Karpathos and, on Friday March 6th, they visited Kera Panagia where they met an aged Vasilis, who told them his sad story.

Theodore wrote about their visit in an article, On a Far-off Island, published in Blackwood’s Edinburgh Magazine (Vol. 139, Feb 1886), 233-244), while Mabel, as ever, took to her diary to pen a colourful account of the day.

This account is taken from the book The Dodecanese: Further Travels Among the Insular Greeks (get the book or download the e-book).

“… our other friends arranged a sort of picnic for us, to a lovely spot called ‘Mrs Madonna’ (Kera Panagía), where a church contains a miraculous picture, and is looked after by a well-known old hermit-monk called Vasili.

The church is at the foot of a narrow gorge down by the sea, amidst tree-clad heights, which culminate in Mount Lastos, the highest peak in Karpathos, 4000 feet above sea-level. Close to this church there is a water source, which springs right out of a rock: it is icy cold and clear, and all around its egress the rock is garlanded with maidenhair; mastic, myrtle, and daphne almost conceal it from view. To this spot, the most favoured one in the island, our friends took us.

“In 1821 a Cretan refugee whose flocks had been destroyed by the Turks, vowed a church to the Panagià if she would lead him to a place of safety. So, says the legend, she conducted his boat here, where he found water, fertility, and seclusion, and here he built the church he had vowed.

“Once a year, on the day of the Assumption, the Karpathiotes make a pilgrimage to this spot; for the rest of the year it is left to the charge of poor old Vasili, who told us the very sad story which had driven him to adopt this hermit life.

“A few years ago he lived in the village, with his two sons and one daughter. She married a sea-captain, a well-to-do sponge-fisher, who owned a boat and much money he said.

“On one of his voyages, the sponge-fisher took with him Vasili’s two sons, and on their way they fell across a boat manned by pirates from Amorgos. The pirates shot the captain, boarded the caïque, and strapped the two brothers to the mast. After they had cleared the boat of all they could find, they sank it, and shortly afterwards some other sponge-fishers found the two brothers fastened to the mast at the bottom of the sea. They gave notice to the Government, and a steamer was despatched from Chios in pursuit of the pirates, and the bodies were brought home and buried. It was but poor satisfaction to old Vasili to hear of the capture of the murderers. 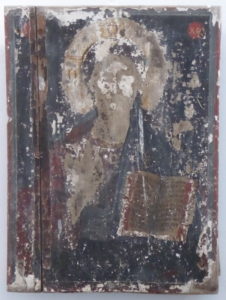 His daughter shortly afterwards married again, and left Karpathos, and he, with his broken heart and tottering step, donned the garb of a monk, and came to end his days at Kera Panagía, where he lives in a little stone hut alongside the church, and tills the ground, lights the lamps before the sacred pictures, and rings the church bell.”

Mabel’s diary entry for the day

This account is taken from the book World Enough, and Time: The Travel Chronicles of Mrs J Theodore Bent Volume I.
While Theodore, in his article, recounted the history of the church and Vasilis’ story, Mabel opted for a gastronomic account of the ‘picnic’. On the following day she wrote:

Theodore and Mabel might be described today as foodies. Theodore’s writings and Mabel’s chronicles are peppered with details of food and drink. Read about their passion for mizithra cheese and about Mabel’s menus.
“We arrived first. I riding 2 hours on a bone-shaking road. The latter part was through pine woods smelling sweetly and with big single white peonies and arums. M  note 1  at once set to work to cook a chicken, or rather aged cock, and was ready with brandy to offer the Turks on their arrival, and at one o’clock we all were seated round a waterproof rug of ours with 2 glasses, few plates, and a moderate amount of forks and spoons. We talked English together. The Turks talked Turkish together, but of course then and there determined to send the soldiers off for a lamb to be eaten à la Palikári  note 2  for dinner. We 2, the 2 Sakolarides  note 3  and a certain Manolakakis  note 4 , in whose house the Kaïmakam  note 5  lodges, went on a long hot rocky walk, and I think I got a little sunstroke, for I had a great pain in the back of my head which is gone today very nearly. We at length found ourselves at the source of a stream springing out of a bed of maidenhair under great big myrtle trees. It was such an enchanting spot.

“At 4 o’clock we sat cross-legged round a heap of mastic bushes and rosemary, and on this bed was laid the lamb who had been borne on a spit through his head and his hind feet tied to it.

“We then tore him limb from limb by hand and all gnawed. I never saw a funnier scene or a merrier meal. After the lamb’s bones were cleaned by the 8 sets of teeth, the Kaïmakam examined the shoulder blades and prophesied peace and quietness, then more sheep’s cream and then home.

“We went half way together and the Kaïmakam and Co. went to Apéri, and we and Mr. Frangisko Sakolarides to Volátha. Having been taking lessons from Hassam Tachrí Effendi, the secretary, I was able to say ‘Teshekür edérim’, ‘Thank you’, to the Kaïmakam. We were led to the café by Mr. Frangisko Sakolarides and given coffee and were very glad to get home safely with only starlight to help us, and I had to walk some way.

“In the little church at Kyriá Panagía, which is quite good and not ruined, there were lots of scribbled names and one of the Greeks said, ‘Now we will write up your name’ and I said ‘Oh, not my name please’, they said ‘Why?’ and I said it was not our custom in England to write our name in churches.”

We’re always searching for more information on the topics and people we write about. Can you add more information about Kera Panagia or old Vasilis, or about the Sakolarides or Mr. Manolakakis? Please contact us using the ‘Comment’ form on this page or on our ‘contact us’ page.

The account from Theodore is taken from the book The Dodecanese: Further Travels Among the Insular Greeks: The Selected Writings of J. Theodore & Mabel V.A. Bent, 1885-1888, edited, with additional material, by Gerald Brisch. Copyright ©2015 Gerald Brisch and Archaeopress. Reproduced by kind permission.

The extract from Mabel’s diary is taken from the book World Enough, and Time: The Travel Chronicles of Mrs J Theodore Bent Volume I: Greece and the Levantine Littoral, transcribed from Mabel’s original hand-written chronicle, with additional material, by Gerald Brisch. Copyright ©2006 Gerald Brisch and Archaeopress. Reproduced by kind permission.

Note 1: Mabel uses ‘M’ to refer to Manthaios Simos, the Bents’ dragoman for many of their travels throughout Greece and beyond. Manthaios was a native of the island of Anafi.
Return from Note 1
Note 2: Palikári (‘rogue’, ‘bandit’) is much used in a familiar form to mean ‘pal’, buddy’, etc. Lamb ‘banditstyle’ exists in older recipe books for a slow-cooked dish of lamb chops, oregano, onions, garlic, tomatoes, cheese and potatoes, similar to kokinistó. It seems, however, that Mabel and her pals devoured their lamb spit-roasted. NOTE: See the comment below, received after the publication of this article, from Deppy Karavassilis-Patestou, the Greek vblogger.
Return from Note 2
Note 3: Mr. Frangisko Sakolarides was the Greek dragoman and interpreter for the Turkish Kaïmakam, or Governor. It seems he was present on the day with his wife. He and his family are mentioned several times throughout Mabel’s chronicle.
Return from Note 3
Note 4: The Manolakakis family was prominent on Kárpathos at the time. An Emmanuel Manolakakis published Karpathiaká (1896), a valued monograph on the history and culture of the island.
Return from Note 4
Note 5: The Kaïmakam was the Turkish Governor of the island.
Return from Note 5