‘It was splendid being up there’ – Mabel climbing the Great Pyramid of Giza on her birthday – Wednesday 28 January 1885. 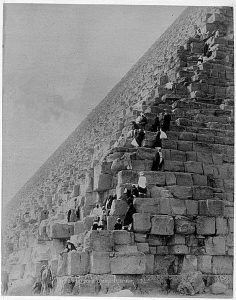 Some Pyramid scalers in 1885 (the year of Mabel’s ascent), by J. Pascal Sébah. Obviously clambering all over them was the thing to do back then; it is not recommended today.

In January 1885, before leaving for a tour of the Dodecanese, Theodore and Mable made a tourist trip to Egypt, taking in, of course, the Pyramids: the Great Pyramid (also known as the ‘Pyramid of Cheops’ and constructed around 2500 BCE), and the smaller Khafre and Menkaure Pyramids. The Sphinx squats in the complex’s eastern quarter.

The visit to the Pyramids coincided with Mabel’s 38th birthday (she was born at Beauparc, Co. Meath, on 28 January 1847) and she went to tea as guests of Frederick and Jessie Head (the wealthy daughter of Australian magnate John D. Mclean) at their stylish home, Mena House, below the Pyramids. (Their house still forms part of the Mena Hotel, the Heads buying their home in 1883, a year after their wedding in Wells, Somerset). Mabel does not record whether Frederick was much out of breath after their visit, or feeling unwell, but in any event within a few months he is dead, and poor Jessie (far from actually poor) sold up to another wealthy couple, the Locke-Kings, who turned the house into a fancy hotel – and it remains one to this day.

Mabel, of course, logs the event in her ‘Chronicle’ for the day. We may assume from her reference to ‘steps’ ‘3 or 4 feet high’ that it was the Great Pyramid she felt moved to attempt. Possibly just because it was there:

[Thursday] Jan. 29th [1885]. I had such a great many birthday treats yesterday, one in particular that I shall never forget unless extreme old age robs me of my memory… A little after 5 we set off for the Pyramids with the gun lent by the porter and enough cartridges for a whole battle. We saw the Pyramids against the sunset sky, a very plain one – all the colours of the rainbow fading and blending one into the other and very few tiny specks of cloud. The simplicity of it suited the Pyramids so well.

… After dinner we went out in the bright moonlight and Theodore… went to visit the Sphinx but I preferred to go up the Pyramid, as I had not done it on Monday… I scrambled up all alone. At first it was very hard and I had to crawl, putting one knee up first, as the steps are 3 or 4 feet high, regardless of bruised knees or shins and I felt quite convinced I must have very little stockings left but I am in a position to send a testimonial to the stocking maker. I did not feel a bit frightened or giddy or obliged to keep my face to the Pyramid but looked up and down. My companions were quite out of sight and it felt odd to be alone with the Pyramid and the moon. I shouted up several times ‘Are you near the top?’ ‘Oh! Not nearly’ came down. Then ‘Am I half way up?’ ‘No Mem’ came up. So I gave up asking. It seemed so long and I wondered how it could be possible to get down… I did not get at all breathless.

I wondered if ‘Fair Rhodope who as the story tells’ sat on the top of the Pyramid,  delighting all beholders, was a poor creature whose clothes had got torn off in the ascent and who could not get down. I thought of the dangers and difficulties in ‘Murray’ and ‘Baedeker’ and determined to read about them and tremble tomorrow, and I banished scornfully a very passing thought of the silk elbows of the only smart frock I have with me, and joyfully and proudly reached the summit, a strangely dressed figure – Hat, silk and velvet brocade body, white lace fichu over it and a blue cloth petticoat with a wide scarlet band, which I quite vainly tried to conceal by tying a black lace scarf round it; the skirt had been discarded before starting.

It was splendid being up there and I think it very very unlikely that any other person has been up by moonlight on his birthday before. I wished for a fire escape! Mr. Head and I came down together, sitting and slipping, sometimes having to put two hands together and jump and were glad indeed to reach the bottom safely … We had some tea and got home after a most delightful evening at 1 o’clock. 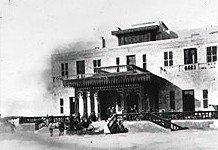 The Head’s residence below the Pyramids, where the Bents had tea, Mina House. Today a boutique hotel on a larger scale; the original house constituting the modern hotel’s dining areas.

For those needing a reference to Mabel’s ‘Fair Rhodope’, we must turn to the lines of Thomas Moore:

‘Fair Rhodope, as story tells,/ The bright unearthly nymph, who dwells/ ‘Mid sunless gold and jewels hid,/ The Lady of the Pyramid!’ (1827, ‘The Epicurean’).

The photographs include one of some Pyramid scalers in 1885 (the year of Mabel’s ascent), by J. Pascal Sébah. Obviously clambering all over them was the thing to do back then; it is not recommended today.

The other photo is of the Head’s residence below the Pyramids, where the Bents had tea, Mina House. Today a boutique hotel on a larger scale; the original house constituting the modern hotel’s dining areas.