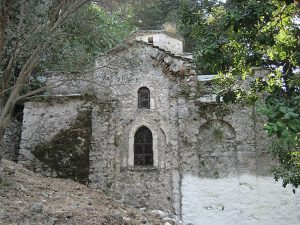 Panagia tou Potamiou, Samos, near where the Bents camped while looking for antiquities in 1886.

For Greek islomanes, two recent Bent posts have washed up on the Friends of Tilos and Friends of Samos FB pages – you can see the Tilos one on another post, but here is the Samos post in case you have a spare moment:

Anyone in the group heard of the Bents? Got a moment? Englishman J. Theodore Bent (1852-1897) and his wife Mabel (1847-1929) were among the most widely travelled of British explorer/antiquarian duos of the second half of the 19th century – their expeditions covered Africa, Arabia, the eastern Mediterranean, and, of course Samos!

The Bents had made their first visit, a brief one, to the island, then Turkish, over the winter of 1882/3, arriving on the lovely Austrian/Lloyd vessel the ‘Niobe’. This was as part of a trip, touristic really, that took in the great sights of the East Mediterranean. Theodore had read History at Wadham and was engaged in Italian/Genoese studies. He wrote three monographs on things Italian, but focussed on Chios and Samos for two articles penned following his first visit there: ‘A Visit to Samos’ (‘Academy’, Issue 579 (1883: June), p. 408) and ‘Two Turkish Islands To-day’ (Macmillan’s Magazine (Issue: 48 (1883: May/Oct.) pp. 299-309). These are well worth tracking down, the latter being highly critical of Turkish rule – and the taxing conditions the islanders faced after a devasting earthquake – and raising letters to the ‘Times’ and questions in the ‘House’, both grist to the mill for the young Bent (although, unsurprisingly, the Turkish authorities were suspicious of him ever after).

But that was three years ago, as it were, in terms of Theodore and Mabel’s next visit to Samos, now arriving at the end of February 1886, in Mabel’s words, ‘on a… little Greek steamer, the Anatoli’; Mabel was a snob at times. By the end of 1885, Theodore’s professional career had turned a corner – he had transformed himself into a budding archaeologist/explorer (today he would be fronting the cameras). In 1883/4 he had famously circled the Cyclades, digging on Antiparos and writing a bestseller on the eponymous isles. A year later, with his wife by his side as always (and by now the expedition chronicler and photographer), he had ‘excavated’ in the Dodecanese, removing – there is no other word for it – some lovely things from Karpathos, now in the British Museum.

Following the successes of their 1885 programme, the Bents decide the next season to cruise down through Turkish waters, revisiting Samos along the way. Theodore, now a member of the council of the Hellenic Society, had obtained a grant of £50 to equip his expedition. Once on Samos, however, he encountered problems with the authorities, repercussions from his undiplomatic behaviour three years previously; the Hellenic Society’s journal of 1886 reports that, ‘owing to unexpected difficulty in obtaining permission to dig in the island, Mr. Bent has not been so successful as he had hoped. He has, however, spent only half the amount.’ The £25 was returned to the Society. Mabel informs us: ‘Truly the balmy days of excavators are over’.

Theodore sketched out his Samos experience in the ‘Athenaeum’ (June 12, 1886), but his longer article was for the ‘Journal of Hellenic Studies’ (Vol. 7, 1886, pp. 143-153), under the title ‘An Archaeological Visit to Samos’. It’s not so hard to find online. He begins his introduction: ‘English enterprise in excavation has been considerably checked of late years by the impossibility of obtaining anything like fair terms from the Greek or Turkish governments… Con-sequently if English archaeologists wish to prosecute re-searches on the actual soil of Hellas, it remains for them to decide whether they are sufficiently remunerated for their trouble and outlay by the bare honour of discovering statues, inscriptions, and other treasures to be placed in the museum of Athens, or, as is the case in Turkey, for the inhabitants to make chalk of, or build into their houses.’ Theodore was piqued: ‘[Though] I tried hard to obtain a concession for taking away one half or one third of the things found I was eventually obliged to sign the same agreement which the French excavator M. Clerk had signed two years before, and which stipulated that everything found should belong to Samos.’ And quite right too of course.

Apart from an important inscription, found by Mabel (and published by Percy Gardner also in the ‘JHS’, Vol. 7, 1886, pp. 143–153), the couple make no major discoveries and leave Samos early and disappointed. They brought home to London a few every-day items they bought, now in the Pitt Rivers Museum, Oxford, including a pair of pigskin shoes (no accession number) and two eagle-bone pipes (1888.37.6 and 1903.130.17). Mabel had a life-long interest in fabrics and embroidery: returning from Tigani with two ‘towels’ she exhibited them at one of Theodore’s lectures, labelled as ‘Two towels from Samos with deep lace ends, partly needle and partly pillow.’ [On Insular Greek Customs’, ‘Journal of the Anthropological Institute of Great Britain and Ireland’, Vol. 15 (1886), p. 402]

The British Museum also has ten or so of Theodore’s Samian finds, which it seems he must have smuggled out. He presented a fine terracotta Satyr mask dated c. 500 BC (1886, 1204.2) (illustrated here) and a glass aryballos (1886, 1204.1), but it seems the other material wasn’t sufficiently interesting to the museum and remained in Mabel’s possession until she donated the items in 1926, a few years before her death. Most of them are not on show but details of them are easily seen in the BM database – just search under ‘Theodore Bent’, for hundreds of his items from the E Med, Arabia and Africa.

The Satyr mask collected by the Bents from Samos and now in the BM.

All in all, Theodore and Mabel (ably assisted by their long-suffering dragoman, one Matthew Simos from Anafi), spent about eight weeks on Samos and around; after a few days on the island they took themselves off to Fourni, Patmos, Kalymnos, Ikaria and elsewhere, before returning to Samos to more or less circumambulate the island (the trip to feature in detail in a second post) in search of items archaeological, ethnographical, and other things generally ending in ‘cal’, including ‘gastronomical’, as Mabel notes once in Tigani: ‘We had coffee and jam first and then a splendid luncheon: soup of rice, whipped eggs and lemon juice, really good, a chicken and some lamb out of the same, Yaprakia, rice and meat in little balls boiled in vine leaves, very good rissoles, yaourt (curdled milk), cheese and fruit. I have not had so good a meal for a long time.’ [‘The Travel Chronicles of Mrs J. Theodore Bent. Volume I: Greece’, 2006, p. 84].

Mabel jotted most of these reminiscences in her ‘Chronicles’, a twenty-year series of notebooks now archived in the Hellenic Society in London and published in three volumes. Here is bucolic entry for April 1886: ‘I spent the afternoon on the bed with my work and book… while Theodore went an hour and a half to inspect a place for digging at Panagia tou Potamiou, or ‘of the river’. He decided it was such a lovely place that we must try there, so on the morning of April 16th [1886] we embarked in a boat and in half an hour reached the mouth of a river and soon pitched the tent on a flat place under some olive trees by a rushing river in a most lovely gorge… Just above our tent is the old church with some old pillars in it; not fine work. Here Matthew made a little stone table and it was our dining room and pantry, but not a very good pantry as the church mice, having plenty of candles to eat, are a thriving race… There is a water mill near, shut up at night. The digging was, I grieve to say, not successful. Theodore thought he had got among some Hellenic cottages; temples, palaces and statues were not to be found, only a large smashed marble pan of unknown use, so after 2 most delightful days in every way but the archaeological, we struck our tent and departed…’ [‘The Travel Chronicles of Mrs J. Theodore Bent. Volume I: Greece’, 2006, pp. 162-3].

The church is illustrated above and Theodore wrote up the same scene for his ‘Journal of Hellenic Studies’ piece (p. 146): ‘At Potamos, a lovely gorge to the north of the island, we found traces of a town, close to which was a ruined Byzantine church, with four Corinthian pillars, huge blocks of stone and cut jasper, probably from some ancient temple. In digging on a tiny plain beneath this we came across the remains of Hellenic buildings, in one of which was a marble slab, rounded at one end, 2 feet 8 inches by 2 feet 9; this marble was very neatly worked with a rim round the edge, and a lip at one end from which the juice of something pressed on the slab was evidently intended to run. Underneath the marble was most carefully worked with slight ornamentation.’

Among the characters encountered on this tour was fellow Oxfordian Henry Fanshawe Tozer. Tozer (in ‘The Islands of the Aegean’, 1890, p. 165) recalls their meeting and that they shared the same lodgings at Tigani: ‘We had the pleasure of meeting Mr. and Mrs. Theodore Bent, who occupied other rooms in the same building; they were engaged in excavating some of the tombs that lie outside the city walls’. Elsewhere in his book (p. 302) Tozer refers to ‘the indefatigable spade of Mr. Bent’ – no under-statement.

The Bents, following trouble with pirates (also to feature in a later post, if you’ve stuck with us this far), leave the island from Vathi in early May 1886, arriving home to their Marble Arch townhouse by the end of the same month. Theodore has a fever he thinks he contracted in the marshes of Samos: a cautionary reminder of the risks to health present in the Mediterranean and further east; that spring there was cholera and death in Brindisi, Trieste, and, of course, Venice.

But anyway – all this was just to introduce the group to the Bents, and hopefully inspire one or two to look them up online over the dark, Samian, winter-winey evenings to come, and maybe, who knows, go listen for their voices among the ghosts of Panagia tou Potamiou. καλό χειμώνα