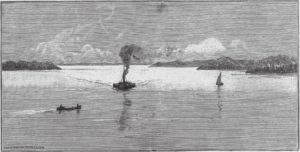 ‘The Agnes steaming up the Pungwe River’.

Thoughts of and for Beira. The terrible floods caused recently by Cyclone Ida in Zimbabwe and Mozambique have tragically inundated Beira, in the central region of the country, where the great Pungwe slides into the Indian Ocean. The Bents knew Beira in late 1891. Mabel Bent writes in her diary as their party heads down east to the sea, and home, from Umtali. Nature then, as now, cares nothing:

“[Wednesday, October 21st, 1891.] Ink all dried up. Hens too tough to eat. Rode among hills. I had a weary time as I had a toothache or neuralgia and felt many a time as if I would tie my horse to a tree and walk. We found no water for a long way; ridge after ridge we climbed, always hoping for water in the next valley. At last, having left the track to seek water, Theodore said, ‘We must go back to the last water’. But I cried, ‘Anything but to go back! I don’t care how far we go now onward to Beira’. ‘Very well. We’ll go on!’ said Theodore…” (Mabel Bent’s ‘Chronicles’, Vol 2, Africa, page 141)

At last the Bents reached the Pungwe. In their day the river was navigable the 40 km or so from Beira only as far as Mpanda’s village and Neves Ferreira – and then only in the right season – by a few small steamers (reminiscent of the ‘African Queen’ for those who know the book/movie). One of these was ‘The Agnes’: “a fine, comfortable, flat-bottomed vessel built after the style of those boats one meets with on European lakes. She is the property of Messrs. Johnson and Co.” (D.C. De Waal, (trans. J.H. Hofmeyr de Waal), ‘With Rhodes in Mashonaland’. 1896, Cape Town, page 142)

Mabel continues: “At 2 next day [15/16 November, 1891] we rowed in a boat with about 25 others to the ‘Agnes’ at Neves Ferreira and went ashore… We went on board about 6. There were only Mr. Maunde and ourselves 1st class, but we were not sorted into classes at all and masters and servants, black and white, all eat at the same table in relays, for the saloon is very small and cockroachey [sic]. At 8.30 the dozen mattresses were served out and I rigged up my hammock and we all slept on deck. I went to the saloon and Theodore held up my dressing gown, for there were people there, and I undressed and in the morning made my toilette in the same way. We started at 9, to stop at 12, but at 11 got stuck on sand, so had to stay till 8 when the tide rose. We reached Beira about 12. The river is not interesting, though here and there are pretty huts nestling among palms, bananas and mangroves. We saw many rhinoceri and only one crocodile. We crossed what seems a lake to get to Beira, a most horrid place with few houses and much sand.” (Mabel Bent’s ‘Chronicles’, Vol 2, Africa, page 158)

The popular Christian nurses Blennerhasset and Sleeman are a little more kindly about the place: “The said town [Beira]… may be described as a long flat reach of sand, over which a few tents were scattered. There were also two iron shanties, and that was all. The place looked, even from afar, the picture of desolation.” However they enjoyed the scene more two years later on their way out: “In 1893 we founds streets, stores, and charming houses of the American chalet type”. (R.A. Blennerhassett and L.A.L.  Sleeman, ‘Adventures in Mashonaland, by Two Hospital Nurses’. 1893, London, pages 61, 324)

The Bents left poor Beira on the S.S. Norseman around 24th November 1891, for their home journey south and onwards to Cape Town and London.

The illustration is ‘The Agnes steaming up the Pungwe River’. From a sketch by ‘Mr. Doyle Glanville’. ‘The Illustrated London News’, 15 August 1891, page 202. Private collection.