Stroll for a minute by Theodore Bent’s childhood home, wherever you are, even if, like the peripatetic Bents, you happen to be in Africa, Arabia, or excavating in the Eastern Med!  This fine, Grade II listed, home consists of two dwellings, a cottage and house, now linked together. From the informative book ‘Baildon and the Baildons; a history of a Yorkshire manor and family’ by W.P. Baildon (1912, Baildon), we have it that the handsome residence also known as ‘The Rookery, Low Baildon… was probably built by Robert Holden; a stone on the south front [of the main house] has the initials “R. H.” and the date 1724; hence Holden Lane, which runs alongside; it was formerly known as “Baildon House.” William Holden of Low Baildon died in 1809, aged 71, leaving an only daughter, Anne, who married John Lambert. Mr. and Mrs. Lambert were both buried in Baildon Chapel, as also was their only son, William Holden Lambert… The property descended to two daughters, one of whom, Margaret Eleanor, married James Bent [Theodore Bent’s father]… Mr. and Mrs. Bent lived at Baildon House (The Rookery), and here was born, in 1852, their son, James Theodore Bent, the distinguished traveller and antiquary…’

James Bent was  was a member of a large and entrepreneurial clan, with, particularly, brewing interests; his marriage in April 1848 to a wealthy heiress, and with a grand house to boot, meant that he could semi-retire to Baildon, his wife’s village (as it was then), and enjoy a life of relative ease and manage quietly his estate and rents until his death in 1876. The mural tablet in the south aisle of the Bents’ local church, St John’s, suggests James’ comfort in his small, close, Baildon family (mercifully distant from the cutthroat, competitive and roller-coaster brewery businesses run by brothers John, William, Thomas and Rowland in Liverpool, Newcastle-under-Lyme and Macclesfield): ‘This Monument is erected in affectionate remembrance of Margaret Eleanor Bent, the beloved wife of James Bent, Esq., of Baildon House, who died November the eleventh, 1873, Aged 62. She was a loving wife, a devoted mother, and an humble Christian, Loving and greatly beloved. ” Thou wilt keep him in perfect peace whose mind is stayed on Thee, because he trusteth in Thee.” Isaiah, xxvi, 3 v. [‘Baildon and the Baildons’, p. 28]. (W.P. Baildon’s book also refers to the Bents having at their local church: ‘St John’s, Baildon: Pews 13 & 15 (latter for ‘servants’)… [and] a pew (34) for Major Bradley for his houses in Kirklands [pp. 193-4]; and page 195 lists James Bent as chapel trustee and ‘of Liverpool, common brewer’.)

James’ in-laws, the Lamberts (sometimes Lambarts) represented a prominent local family, Lords of the Manor of Baildon, with an elegant ‘Hall’ and local estates – memorials to them can be found today in St John’s church. (An harmonious coda followed when Theodore married Mabel, her Irish mother coming from a distant branch of this family.)

For a glimpse of this area of Yorkshire (Aireborough, Baildon, Bingley, Shipley) in 1889/91 (when Theodore Bent was still a property owner there) there is an evocative 1894 OS 6″ map; and for delightful armchair ‘walks’ of Baildon, settle down with the series of on-line booklets produced by Baildon Local History Society (Commissioned by Baildon Parish Council) and no-nonsensely illustrated by Roy Lorrain-Smith (good maps by Vic McLindon). Their ‘Threshfield Walk‘ (revised 2016) includes the Lamberts’ ‘Baildon Hall’, the Bents’ ‘Baildon House’, and sections on Theodore Bent’s assets at ‘Brook Hill’, a portion of which “… is said to have been one of the properties sold by James Theodore Bent to finance his trip to Zimbabwe to visit the ruins in Mashonaland in 1890/91” – but this is uncorroborated.

After his father’s death, Theodore kept Baildon House, renting it out, residing with his wife at their (rented) house in London (Great Cumberland Place, first 43, then 13) and their larger manor at Sutton Hall, outside Macclesfield. A few days after their wedding, however, Theodore sold off much of his Baildon land to the local authorities:

Bradford Town Council – A quarterly and special meeting of the Town Council will be held on Tuesday [14th August 1877]… accepting the offer of Mr James Theodore Bent to sell to the Corporation certain lands and hereditaments situate in the township of Baildon, containing 25 acres, 2 roods, and 18 perches [c. 10 ha], for the sum of £4,000 [c. £200,000].” (The Bradford Daily Telegraph, 11 August 1877)

On Theodore’s death in 1897, the Baildon property was sold to a Mr. Smith Feather, J. P. 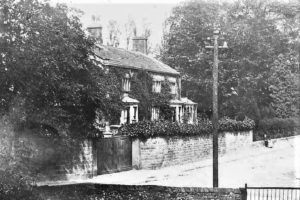 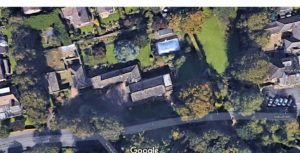 Outer bays have mid-C20 canted bay windows with 4-light window above. 2nd bay has altered doorway with date stone over in decorative plaque with single-light window above. 3rd bay has 5-light window to each floor. 1st-floor windows have recessed flat-faced mullions with an inner chamfer. Moulded eaves cornice, coped gables with stacks… Interior: most rooms have richly moulded cornices. Stairhall has closed string staircase with wreathed and ramped handrail, slender turned balusters, 2 to each riser, pair of cast-iron columns the capitals enriched with acanthus decoration. Semicircular-arched doorway with impost, architrave and keystone.’

… and having completed your stroll, you will have earned a bottle or two of Bent’s Ales!