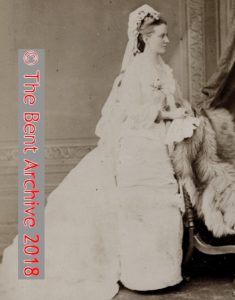 Mabel in her wedding dress; an undated studio photo, probably taken after her marriage.

We don’t yet know how, where and when the young Theodore Bent (1852-1897) first met Mabel Virginia Anna Hall-Dare (1847-1929), although Mabel in an article reveals that they met in Norway of all places (see the press cutting that follows from The Citizen of 1907).* Theodore having graduated from Oxford, Wadham, in 1875. They married near Mabel’s family seat (Co. Wexford) on 2 August 1877 (Mabel 31, Theodore 26), in the little church of Staplestown, Co. Carlow. 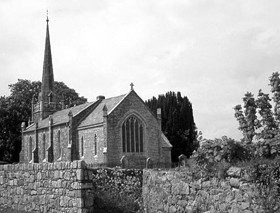 The officiating clerics were the Rev. Charles Lambart, uncle of the bride, assisted by the Rev. H. A. Barker and the Rev. T. Hatchell. Theodore’s residence is cited as his manor at Sutton Hall, outside Macclesfield, Cheshire. As an only son and with both parents dead, his side of the church would have been thinly populated, in contrast to his Anglo-Irish bride’s. Who gave away the flame-haired Mabel remains a mystery, her (sympathetic) brother Robert having died of typhoid in Rome in 1876, while her (unsympathetic) father, also Robert, passed on in 1866.

(The post-scriptum to this wedding has to refer to the allotted span of 19 years and 9 months the pair were to have together for their explorations of the E Med, Africa, and Arabia. Theodore died of malarial fever complications on 5 May 1897. But, nevertheless, the couple did have their world enough, and time.)

* “Visitor of Outlandish Countries: Mrs Theodore Bent, who is just off to Jerusalem, has all her life been very much of a traveller. She first met her late husband in Norway, and she accompanied him in subsequent years to Abyssinia, Mashonaland and Arabia, and other out-of-the-way parts of the world, sharing in all the dangers, discomforts, and enthusiasms of his many archaeological expeditions. Mrs Bent, who speaks several languages fluently, comes of an old family of the name of Hall-Dare, well-known in Counties Wexford and Essex.” (From the Dublin periodical The Citizen or Dublin Monthly Magazine, Saturday, December 21, 1907)

The illustrations above include a wedding notice from The York Herald (Monday, August 6th, 1877), and Mabel in her wedding dress – an undated studio photo, probably taken after her marriage to Theodore, posed in the Baker Street studios of Thomas Fall (celebrated for his studies of the pets of the rich and famous – during the 1890s he was commissioned by the Princess of Wales, later Queen Alexandra, to photograph her with her dogs earning the company a Royal Warrant). The other photograph is of Staplestown church, Co. Carlow, taken from the website of the ‘National Inventory of Architectural Heritage’.