A recent post on the ‘Friends of Tilos’ (Dodecanese, Greece) Facebook page is very much worth re-posting here! Read on! 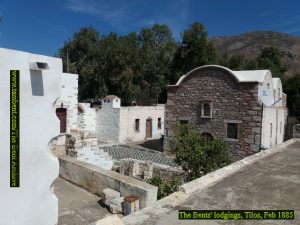 “Anyone heard of the Bents? J. Theodore Bent (1852-1897) and his wife Mabel (1847-1929) were among the most widely travelled explorer/antiquarian duos of the second half of the 19th century – their expeditions covered Africa, Arabia, the eastern Mediterranean, and, of course Tilos!

“The couple arrived at Agios Andonios on 24 February 1885, on a hired boat from Nisiros, and set sail for Karpathos (from Livadia) on 5 March. Having landed safely, the party took the old kalderimi to Megalo Chorio, and for the whole of their stay on the island they were accommodated in the the little monastery complex of the Apostles/Ag Panteleimon below Megalo Chorio. (Most of what follows is taken from ‘The Dodecanese: Further Travels Among the Insular Greeks‘. Selected Writings of J. Theodore & Mabel V.A. Bent, 1885-1888: Archaeopress, 2015.)

“Mabel noted the arrival in her diary: ‘We saw a good many people on the shore as we approached, but by the time we landed not one was in sight. The boatman then holloed out ‘Come near, fear not! We are from Nisiros, you may come safely!’ So out they came and we went to meet them and they said, ‘What people are you? From The Town?’ We said we were not from Constantinople but from England, but this did not enlighten them much.’ (Mabel Bent, ‘World Enough, and Time: The Travel Chronicles of Mrs J Theodore Bent Volume I: Greece and the Levantine Littoral‘, p. 74)

“It is never too late for a coffee, tho, and Mabel describes the local Costa (the couple are waiting for news of their accommodation to be: ‘When we were ¼ mile off we met Matthew [their dragoman from Anafi] and the schoolmaster Spirídonos clad in black European dress, and we went ﬁrst down a great many narrow piggy streets and rocky stairs to the café, and we sat for about an hour on a balcony, homeless for one of our friends was absent and the Egoúmenos out..” This cafe still stands, but now, alas, firmly shut. The modern one, not quite as nice, is lower down the village somewhat.

“Theodore, in his later article ‘A Protracted Wedding’ (‘The Gentleman’s Magazine’, Issue 265:1894 (1888:Oct), pp. 331-341) is more the travel-writer: ‘On the eve of a fine February day we reached Telos in a small sailing craft, thankful enough to have escaped the treacheries of a winter’s sail in these dangerous waters, and, as we approached, some few inhabitants came down to stare at us, prior to beating a hasty retreat, and for some time after we landed we could not induce them to approach. ‘They take you for pirates,’ said our sailors… These first acquaintances of ours on Telos were all women, dressed oddly enough; on their heads they wore a red-peaked cap, like those Phrygian helmets one sees on old vases, tied on with a red handkerchief round the forehead; from their ears hung down immense silver rings or bangles, five or six in each ear… They had on dark-brown coats of coarse home-spun material, which came below the knee, and they were girt with a red girdle; beneath this coat peeped their white shirt, rich at the edge with many-coloured embroidery; as for their feet, they were bare just now, and their long yellow leather shoes, with pointed ends, were cast on one side, for the women down here were washerwomen, engaged in treading flannel clothes and other things on boards; for the Teliote women wash in this fashion with their feet, like Nausicaa and her maidens, who “bore the clothes to the black water, and briskly trod them down in the trenches in busy rivalry.”’

“Bent went on to write that the objective of their stay was to record an imminent wedding (very unlike the French one witnessed the other month by the present writer, and many thanks to Ian Smith for the raki by the way – a pleasure to meet him and his dog walking in Megalo Chorio), but actually Bent was there to see what he might dig up. He excavated at a couple of unspecified cemeteries but left with very little, the best of the finds had been removed decades before by men like Charles Newton (a search under ‘Telos’ in the British Museum’s database will show some of the magnificent vases that once graced the island, indicating its prestige in the centuries before Christ). Bent’s account, for those interested, and worth the tracking down, was published as ‘The Islands of Telos and Karpathos’, ‘Journal of Hellenic Studies’, 1885, Vol. VI, pp. 233-242.

“Anyway – this was just to introduce the group to the Bents, and hopefully inspire one or two to look them up online over the dark Tilos winter evenings to come, and maybe go listen for their voices in the little monastery below Megalo Horio. καλό χειμώνα.”