Ships played a central role in the lives of the Bents; they were as familiar and essential to the couple as planes and airports are to us. 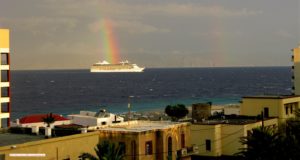 The Oceania cruise ship ‘Riviera’ shown in the rainbow (the photograph was taken from Rhodes, looking northish, and roughly from the area (‘Kum Burnú’) the Bents had their modest lodgings).

So let’s steam, then, into 2019 along one of the Bents’ favourite waterways – the narrow straits separating Rhodes from Marmaris and the Turkish coast – only the vessels they travelled on in their time were a little different than the Oceania cruise ship ‘Riviera’ shown in the rainbow (the photograph was taken from Rhodes, looking northish, and roughly from the area (‘Kum Burnú’) the Bents had their modest lodgings, in early 1885, being not allowed, as Christians, to overnight in the Old Town).

Mabel notes in her diary: “We are at a clean little inn in the separate village called Neo Marás, the Christian quarter quite close to the sandy and windmilly point Kum Burnú at the north of the isle. It is quite a little walk to the town where no one but Jew or Turk may remain after sun set… There are quantities of smooth black and white shingles which are extensively used for paving floors and court yards in all sorts of designs. The passage outside our door and the dining room too have very pretty patterns.” (‘The Dodecanese; or Further Travels Among the Insular Greeks’, Archaeopress 2015, page 108).

In early 1885, Theodore and Mabel Bent arrived in Rhodian waters, via these extended straits in the photograph, from Alexandria, on the Austrian Lloyd ‘Saturno’ (1845 tons, built in 1868, in service until 1910), and left a few weeks later on the much smaller steamship ‘Ρούμελη’ (297 tons, 155 feet), which linked the smaller islands of the eastern Mediterranean. Originally named ‘Operculum’, and Clyde built, she comes into view several times in Mabel’s diary pages. She was ultimately broken up at Savona in 1933, a few years after Mabel’s death. In another twist of fate, the ‘Operculum’ also covered the South Arabian seas between Aden and Socotra, the setting for one of the last journeys Theodore Bent was to make, in early 1897, months before his death. How wonderful these old ships were, although Mabel was not so fond of this one:

“Well! The Roúmeli is a dirty little ship, and Theodore and I slept in the very smelliest cabin, destined for ladies by the English builders. As it was a passage room for all the passengers a quilt was hung across, but the steward was often within our side. At 11.30, two hours after we left Rhodes, we reached Simi and in the dark and by starlight I could see that we remained in a little land-locked bay for 2 or 3 hours. It looked lovely but no doubt by day it looks bare enough and like Chalki, which we got to about 7, a most hideous island, stony like Syra and not even the picturesque town to redeem it. We did not land there; there is a revolution about the tax on sponges and the Pasha of Rhodes was just going there so we came on to Nisiros, which we reached about 12.30.” (‘The Dodecanese; or Further Travels Among the Insular Greeks’, Archaeopress 2015, page 111).

All together, the Bents sailed over the rainbow here in these waters, between the tip of Rhodes and Marmaris, at least five times – check them out via the interactive map on our site.