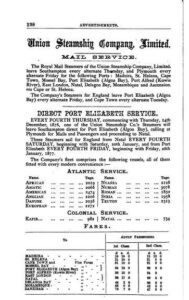 The Bents embarked on a ‘fleet’ of ships during their twenty years of explorations to the Mediterranean, Middle East, and Africa, from 1880 to 1900 (see the interactive maps on this site for additional info!). They would have spent thousands of pounds on the fares, taking 1st class where they could (often sponsored by London institutions). One way to Cape Town in the late 1870s was the modern equivalent of about £2500, the Bents steamed there in 1891.

The following blog posts investigate just some of these vessels: