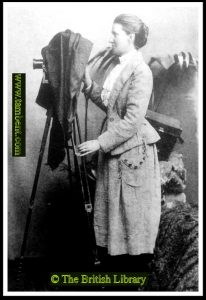 Thanks to the British Library, we are delighted to show this extremely rare studio photo of Mabel standing beside her camera and tripod and attired for the wilds. We don’t expect more than a few people will have seen this since it was published in July 1895. Assuming the portrait was taken in the first half of that year, Mabel – her trademark long red hair coiled elegantly as ever – would have just reappeared from Muscat, Oman and Dhofar, and be preparing for the coming winter’s journey with her husband along the west coast of the Red Sea. That Mabel would feature in ‘The Album’ is no surprise – ever since the couple’s journey in 1891 to the ruins of Great Zimbabwe for Cecil Rhodes the Bents were celebrities.

It’s not immediately obvious which of her cameras she is displaying here; Mabel’s small apparatus of choice was her ‘Luzo’ box camera, however the protruding lens indicates another, larger model. If anyone can identify it, please write in!

There is every chance that the above, never-bettered, photograph of Mabel was taken at the same sitting at Russell’s as the iconic portrait of Theodore, with solar topee and famous whip. It was this image that Mabel might well have selected personally for the obituary of her husband, printed in the Illustrated London News of 15 May 1897 (page 669).