A typical word-portrait of Mabel Bent reads mostly along the lines of this one, from the ‘Anglo-African Who’s Who’ (Wills and Barrett (eds), 1905):

‘BENT, Mrs. Mabel Virginia Anna, of 13, Great Cumberland Place, W., and of the Ladies’ Empire Club, is a daughter of Robert Westley Hall-Dare, D.L., of Theydon Bois, Wennington Hall, Essex, and Newtownbarry House, Co. Wexford. She was married Aug. 2, 1877, to the late Theodore Bent, of Baildon House, Yorks. Mrs. Bent accompanied her husband in all his explorations, and took part in the excavations with which he was associated in the Greek and Turkish Islands, Asia Minor, Abyssinia, the Great Zimbabye (Mashonaland), Persia, and elsewhere. She is the authoress of ‘Southern Arabia, Soudan, and Sokotra,’ compiled from her own and Mr. Theodore Bent’s notes.’

But we are lucky that there exists a very rare autobiographical snapshot of her earliest years – appearing in the gossipy rag ‘Mainly about People’. A lengthy extract here conjures her up [ed note: Mabel Virginia Anna Hall-Dare was born (January 1847) and raised among the minor Anglo-Irish aristocracy]:

‘My baby eyes first looked out on an extremely beautiful bit of this world, for I was born at Beauparc, in the county of Meath, my grandfather Gustavus Lambart’s place, which, being situated on a very high bank at a sharp curve of the River Boyne, seems as if it were upon an island looking straight down the river. The right bank is high and wooded, and the left has a narrow grassy flat between the water and a low craggy cliff, above which you see away over tree-studded fields to a ruined castle with woods beyond; and my eyes, which have since been so much exercised in seeking for archaeological sites where to make excavations, must also have fallen on the wonderful ancient tumulus of New Grange. So much did this view please me the first time I can remember seeing it, that, having arrived in the dark one night, the following morning about four or five o’clock my wretched mother was startled from her sleep by shrieks and shouts to find me jumping up and down as hard as I could at the window, a manifestation of my ecstasy of delight at the sight of the snow and icicles and all the wintry beauty spread before me. 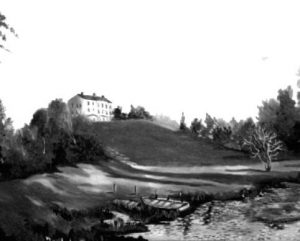 ‘Beauparc – Lady Lambert’s House’. Mabel Hall-Dare was born here, in County Meath, Ireland, in January 1847. From a watercolour by Garrett Scanlan. (Reproduced with the artist’s permission)

‘Although I certainly had no inkling of the fate that awaited me, being a ‘Thursday’s bairn who has far to go’, no child was ever fonder of reading and poring over maps and lists and pictures of traveller’s requisites than I was… I was also a most determined dweller in tents, for I used to pull my bed to pieces and hang up my top sheet by the nail of a picture, making a good hole that it should hold well, and then, arranging my bedding to suit my fancy, imagine I was sleeping on the ground. It was not comfortable, but there was something very nice about it. In one of my investigations of the library at home I came upon a book that I made up my mind to examine. It had a delightful title ‘The Atlas of Undiscovered Countries’. It was firmly fixed, and to get at it I had to exert all my strength and become very hot, tugging out the great folios that were on each side, and then to my disgust I found my prize was only a false wooden book to support the upper shelf. Years after I exclaimed, ‘Now I have really an atlas of undiscovered countries of my own’, when I eagerly unpacked a map in eight sheets (that my husband had had made at Stanford’s, of Southern Arabia, when we were first thinking of exploring that part of the world) and found two or three of the sheets blank save for latitude and longitude marks. I am glad to say that the blank is not so large now…

‘Some very strange things have been written in the way of description of the dress I wore when travelling in outlandish places – just a shooting dress. The accounts are such that my friends refuse to believe in my photographs, as they in no way tally with what they have read. One paper had it that I wore a spiked helmet, whereas what goes by the name of my pith helmet is of rather a large mushroom shape. All this is very amusing to me. A statement which delighted the whole of my family was one that ‘Mrs. Theodore Bent is never tired of expatiating on the sagacity of the horse, and its superiority in this respect to the mule or the camel’. Against whose attacks have I had to defend the ‘noble animal’. The first intimation of this came to me suddenly when I opened a magazine in a boatful of strangers in Aden Harbour. My husband, who had landed first to seek a dwelling on our return from Dhofar, had sent my mail (some months’ accumulation) on board. I nearly went into hysterics, tears rolled down my cheeks, the various coloured fellow-passengers stared, but I could not control my mirth nor explain the cause of its sudden outburst. After all, in a residence of a week or ten days at Aden, which has been my unfortunate fate seven or eight times, one is glad of anything to cheer one up. On this occasion we were so lucky as to be able to hire an unlet shop, where we set up our camp in dust that never could be swept up, and by night slept in the surrounding dens, alive with bugs, and those horrid ‘fish moths’, which are rather like earwigs, and eat cloth, linen, paper, ivory – in fact, everything but metal. Our servants cooked at various fires in the inner yard according to their religion, and spread their beds on the floor of the shop at night. Neither window shutters nor doors could be kept open or shut for lack of fastening, and slammed and banged to and fro incessantly. What we could not help we tried not to heed, and only rejoiced that we were masters of our own kitchen and could feed as we pleased much better than in the hotels. I really was once taken for a man, and caused a terrible commotion as I entered a Turkish bath filled with ladies about whose costume there is nothing to tell. I had on a tight fitting ulster and a hat, and the waist and the hat and the long coat made me really look very like a Persian man…

‘My youth was spent partly in England, but mostly in Ireland, my father having property in both countries, and we were often taken abroad for a summer or a winter. This is certainly the best way of learning languages, of which I was fortunately always very fond. It was a great help when it was necessary for me to look up references in various tongues and in old manuscripts. I have often been in places where I have heard no English at all. It would have astonished me very much in the days of my youth if I had been told that I should ever abide for some time in the Republic of San Marino and become a citizen of it. The diploma was sent after my husband had written a history of the Republic (‘A Freak of Freedom’), and he received a letter subsequently from a friend beginning, ‘Dear Sir and Fellow Citizen,’ congratulating him, and reminding him that ‘no matter at what distance he might lie from the Republic, he would be under her protection.’

‘It was lucky that I was so well used to riding, as I have had so much of it on horses, donkeys, mules, camels, and even elephants. I do not mind camel-riding at all, and really like it when I trot. However, no matter what I do abroad, when necessity compels, in the way of blacking boots, cobbling them, covering umbrellas, or mending their ribs, washing clothes, soldering cooking-pots, or ‘washing up’ (which last I hate), I try to live it down in after life, and when I am at home to enjoy the privileges of civilisation, to wear dresses of whatever length fashion desires of me, and hats that will pass in a crowd. I cannot understand the feeling which makes people wish to disguise themselves as travellers when at home. Certainly I have been granted some of the wishes that I made in the days of my youth!’ (Mabel Virginia Anna Bent)