Greek Dress at the Hellenic Centre, London – 4 February until 2 March 2014 – The Bents’ acquisitions and their stories! 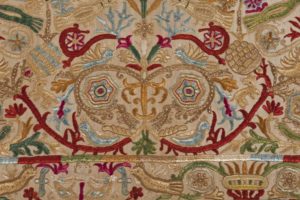 Although Theodore and Mabel Bent lived not so far away, Marylebone, in Central London, might seem an unlikely place for an exhibition of Greek costume, but it is the home of the Hellenic Centre, a focus for philhellenes and London’s Greek community. From 4 February until 2 March 2014, there was a rare opportunity to see an impressive range of Greek dress outside its native land. As part of the event (on Friday 28 February, 7.15 pm), Ann French, Textile Conservator at the Whitworth Art Gallery, the University of Manchester, used selected embroideries from the 1914 pioneering  embroidery exhibition (click for the online catalogue) at the Burlington Fine Arts Club in London, to trace their individual collecting histories and reveal the different contexts, interpretations and values placed on them within UK based collections and museums.  This exhibition, which drew on the leading collections of the day, primarily from the collection of Theodore and Mabel Bent and the archaeologists R M Dawkins & A J B Wace, of Greek Embroideries displayed, for the first time in the UK, historic Greek Embroideries as an art form. There is a short, but wonderful, promotional video on YouTube (April 2021).

The exhibition features several  of the Bent’s finest costumes and pieces, and Ann refers to them in the last five minutes or so of her talk in a fascinating account of how, on Mabel’s death, one of her Karpathos frocks found its way back to Greece! (One other is in store at the V & A, and two more from Nisyros are untraced – if you have them, let us know!)

Click here also for the small collection of ‘Turkish’ embroideries once owned by the Bents and now in the Harris Museum and Gallery, Preston, UK, and here for dresses from Anafi in the Cyclades.

(For the Bents in Greece and Turkey, see Mabel Bent’s Chronicles, published by Archaeopress, Oxford, in 3 volumes)