‘In the Footsteps of Theodore and Mabel’

Jennifer Barclay muses for us on the ‘blessed’ Bents, May 2020…

“And then, by chance, I met Theodore and Mabel Bent. They came into my life as a blessing because they told me, through their diaries, what these places were like a century and a half ago in the 1880s.”

For the last few years, I had been exploring the deserted places of the Dodecanese, a group of islands at the southeast edge of Greece where it almost touches Turkey. Starting with Tilos, where I live, heading north, south, east and west, I was going to the abandoned farms and harbours, the semi-abandoned villages and islands.

Many of these places had been well populated, self-sufficient and thriving for centuries, even during the Ottoman occupation. I was trying to understand better what happened over the last century or two, when their populations plummeted from thousands to hundreds. The stories differ from island to island, but a combination of hardships at home and opportunities elsewhere caused mass emigration.

And then, by chance, I met Theodore and Mabel Bent. They came into my life as a blessing because they told me, through their diaries, what these places were like a century and a half ago in the 1880s.

These diaries were compiled into a book called The Dodecanese: Further Travels Among the Insular Greeks – the Selected Writings of J. Theodore & Mabel V.A. Bent, 1885–1888 edited by Gerald Brisch, and I believe I found it on the shelves of Akadimias Bookshop in Rhodes town. Through it, I was able to travel in their footsteps and see through their eyes a few of the islands I was exploring for my own book – Wild Abandon: A Journey to the Deserted Places of the Dodecanese – before the dramatic changes began.

Theodore came from the north of England, studied history at Oxford, was headed for the Bar, but gave it up to pursue his love of travel, social history and archaeology. When he married the tall, confident, Irish redhead Mabel Hall-Dare in August 1877, they set out on a life of travel and adventure.

But I must hold up my hands and say that, at first, I didn’t much like the Bents. The aim of their trip around the Dodecanese, it soon became clear, was to excavate and remove items of archaeological interest, usually without permission or with Ottoman officials turning a blind eye in return for baksheesh.

They weren’t here to get all touchy-feely with the locals; they were here to take stuff from under their noses, and they got exasperated when they found nothing of value. When in 1888, they arrived on the Turkish shores near Kastellorizo in search of antiquities in the temples and rock-cut tombs, they lamented that some lucky Austrians had got there first and taken all the good pieces. They travelled to Kastellorizo only to register with its Greek consul that they had come from Turkey, so that on their return journey the Greeks elsewhere could not touch the items they had collected. You can’t help thinking of a certain Lord Elgin who had carted off the sculptures from the Parthenon earlier in the nineteenth century.

Not only that, but they were shocked by the islanders’ ‘ignorance and superstition’, in a way that reads today as a little condescending. Could Theodore and Mabel, I wondered, have built a house or made their own clothes and sustenance, survived in such a rugged, isolated place on what they could find and grow, as the islanders were doing then? It reminded me of how native Americans were being treated around that time for their supposed ignorance and superstition.

But that was the spirit of the times, and it’s easy to poke fun now. The goatskin bagpipe or tsambouna that the Bents took back from Tilos to England 150 years ago for safekeeping in the Pitt Rivers Museum, still there on display in Oxford, might be one of very few Tilos tsambouna still in existence. In the books, and on the Bent Archive website Gerry Brisch co-edits, there’s plenty of evidence that the Bents were extraordinary people who travelled far further into the unknown than I’d first realised. And the fact is that what Theodore and Mabel encountered in the Dodecanese back then took them well out of their comfort zone, and their diaries are finely detailed and often exquisitely phrased.

In their brief visit to Tilos they stayed with the priest, who also cured hides for making shoes. The village houses were dark, they wrote, and women sat spinning on their roofs. Tilos was ‘thinly populated, and as remote a spot as well could be found from any centre of civilisation’, rarely visited by steamer or sailing boats. Women wore coats of homespun material, and pointed leather shoes; they had wild, gypsy looks and wore earrings so big they deformed their ears. There was no doctor; the local people would ‘live and die as birds of the air’.

The Bents provide a rare record of the way the ‘decayed men’ suffering from leprosy hid in dark corners of the homes so that they wouldn’t be taken away from their families to some faraway hospital.

We also see a poignant picture of Rhodes town in the late 1880s, a multi-cultural society of peoples from around the Mediterranean, with the Old Town exclusively inhabited by Muslim Turks and Spanish Jews. The latter had ‘managed to secure for themselves the best quarter’, their houses tastefully decorated and their children well educated. Some sixty years later, there would be no more than a handful of Jewish people left in Rhodes.

Theodore and Mabel Bent travelled direct from Tilos to Karpathos in February 1885 in their private boat. Rains had washed away the track to Olympos, and violent gusts of wind damaged the vessel. They wrote that both islands were ‘very difficult of access and rarely visited by foreigners’, and that they had therefore retained ancient customs and myths. Karpathos, wrote Theodore, was ‘one of the most lost islands of the Aegean Sea’. In some ways it still is, and it continues to retain customs and knowledge that has vanished elsewhere.

These islands are no longer lost. Whatever the challenges of travel currently, we can usually visit the islands much more easily today, and thanks to this intrepid couple, we have rare glimpses into their past.

I grew to like my new acquaintances Theodore and Mabel, and their writings deserve to be better known… 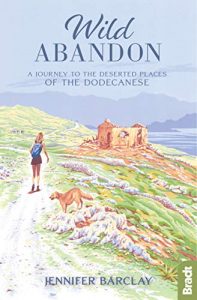 Wild Abandon: A Journey to the Deserted Places of the Dodecanese is published by Bradt Travel Guides and is available in e-book from Amazon and other retailers from May 2020, with the paperback scheduled for September 2020.

Jennifer Barclay grew up in a village in the Pennines in the north of England and studied Ancient Greek at grammar school; after studying English at Oxford she spent a year in Athens and has travelled widely in the Greek islands. She settled on Tilos in the Dodecanese in 2011, where she lives surrounded by hills and sea with her dog and works from home as an editor and literary agent. She has written a book about Korea, Meeting Mr Kim, and two books about Greek island life, Falling in Honey and An Octopus in my Ouzo. A contributor to publications including The Times, Metro, The Guardian, Daily Mail, Food and Travel and Psychologies, she has appeared on BBC Radio 4 and on Greek television.