‘Mabel’s Menus: the culinary notes of an archaeologist‘ sheds a fascinating light on an otherwise little-known area of the Bents’ lives.

Of course, back home in London, Theodore and Mabel would have dined very well. Unfortunately, Mabel’s chronicles only cover their travels and it’s a shame we know nothing about their day-to-day lives when they were not on their travels. They almost certainly would have had house servants and one doubts they would have cooked for themselves, but we have little insight into what gastronomy they may have enjoyed at home.

However, we DO know from Theodore’s writings, and from Mabel’s chronicles, that food and gastronomy were high on their list of survival strategies on many of their arduous journeys.

The Bents were clearly partial to woodcock and Theodore writes enviously while delayed in Milos waiting for the steamer:

We frequently visited Consul Brest, and had interesting conversations on Melos. Moreover he gave us an excellent pot of vegetable-marrow and almond jam to help us in our evil day; but we looked grudgingly at some woodcock on his stairs, which we longed for, and could not get, as they were to be sent to Syra by the steamer; and it was our one consolation in the eventual delay to learn that all these woodcock went bad and had to be thrown away.

We certainly know that, during the Greek explorations, the local mizithra cheese was something they relished. As Theodore wrItes: 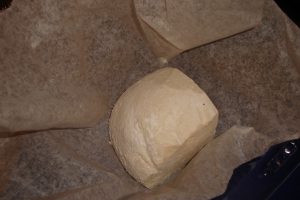 Ios is celebrated for its flocks and herds, and of all islands Ios is the most celebrated for its mysethra, ‘food for the gods,’ as they call it. It is simply a curd made of boiled sheep’s milk, strained and pressed into a wicker basket called tyrobolon, just as they are spoken of in the ‘Odyssey’; from this basket it gets a pretty pattern before being turned out on to a plate. When eaten with honey it is truly delicious. I have tasted the same in Corsica called broccio but not so good as those of Ios; in fact, the mysethra of the neighbouring islands does not approach that of Ios — there is something in the pasturage which produces the proper flavour. They make mysethra cakes, but they are inferior to the original thing, and the peasants most frequently salt them, in which condition they are perfectly horrid.

Some of this excellent mysethra we had for our breakfast next morning, and some of it, together with cold fish and plenty of wine, the demarch put into a basket for us to take with us on an expedition … The three brothers and the three girls went down with us to the harbour, where our boat was waiting, bringing with them a fresh mysethra, wine, and figs for our journey.

And on Kea, Theodore writes: 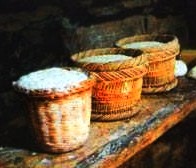 The people at the convent, the old man and his granddaughters, who till the ground around and look after the church, were most hospitably inclined, and provided us with an excellent mysethra, hot and fresh, for our midday meal, and we had the further charm of watching it made. They poured fresh goats’ milk into boiling whey and then squeezed it and compressed it into a wicker basket until it was compact and beautifully white

The following video is a portrait of Manolis Farm Guesthouse on Naxos, featuring the making of traditional mizithra cheese. Produced, filmed and edited by Anneke Verschave.

Read about mizithra cheese on Wikipedia.

One thought on “Woodcock and mizithra”