We are delighted to post the third in Professor Margaret Kenna’s Theodore and Mabel Bent-related series of ‘incidentals’ covering the Cycladic island of Anáfi. Margaret is a retired social anthropologist from Swansea University who has been carrying out research on Anáfi, and among Anáfiot migrants in Athens, since 1966. She has written two books and many articles in English about her research: Greek Island Life: Fieldwork on Anafi (2nd edition 2017, Sean Kingston Publishing), and The Social Organisation of Exile: Greek Political Dissidents in the 1930s (2001, Routledge). A Greek translation of the second book was published in 2004 by Alexandreia Press. Many of her articles, in English and in Greek translation, can be found on the websites: academia.edu and ResearchGate. She has also written several booklets which can be found in tourist shops on the island: Anafi: a Brief Guide; Anafi: Island of Exile; The Folklore and Traditions of Anafi, and The Traditional Embroideries of Anafi. She was made an Honorary Citizen of the island in 2006.

This third short ‘talk’ in Professor Kenna’s thyme-scented series involves an island dress: ‘Mabel’s notes; Theodore’s published text; BUT what did Efthimia’s costume look like?’. During the time the Bents were on Anafi in early January 1884, they were fancily entertained by ‘the demarch’, surnamed Chalaris. On the first evening, they asked his daughter ‘Eutimia’, also the niece of their guide Matthaios Simos, an Anafiot, to show them ‘one of the old Anaphiote costumes’….

Mabel’s notes; Theodore’s published text; BUT what did Efthimia’s costume look like?

“During the time they were on Anafi in early January 1884, the Bents were entertained by ‘the demarch’, surnamed Chalaris. On the first evening, they asked his daughter ‘Eutimia’, also the niece of their guide Matthaios Simos, an Anafiot, to show them ‘one of the old Anaphiote costumes’. (Nowadays the name is more likely to be spelt Efthimia, as that is how it is pronounced).

“Theodore Bent describes her appearance as ‘magnificent’. In his description of the costume he borrows almost word for word from his wife’s account in her diary: ‘[the costume] consisted of a violet silk brocade skirt, green velvet bodice, gold embroidered stomacher [(a ‘stomacher’ is a V-shaped piece of decorative cloth filling the opening of a bodice], and a short pink satin jacket, edged round the cuffs and down the front with pink fur. The headdress somewhat resembled the pina of Siphnos, but is here called ‘the circle’ (ό κύκλος): it consists of a tall wedge of cotton inside, over which Oriental handkerchiefs are gracefully arranged, so that the ends hang down over the shoulders.’ [Mabel’s diary (kindly supplied by Gerry Brisch; 2006) does not mention the pina, but says ‘Her head was very prettily arranged with 2 of the little embroidered towels we use for antimacassars’.] ‘During the last few years this style of dress has been entirely abandoned; those who wore it were laughed at; and Eutimia that evening came in for a good share of ridicule,…’ (Bent 1885: 45).

“So – what did the ‘old Anaphiote dress’ look like? If we look at old engravings of the costume of the women of Sifnos, we can get some idea of how the pina (rather like a dunce’s cap) looked, and the fur-trimmed jacket: 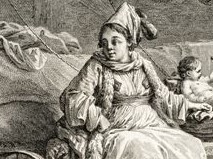 “A traditional woman’s costume (in the National Historical Museum in Athens) from the island of Amorgos (roughly 32 miles/ 50 kilometres north-north-east of Anafi) possibly helps with what the skirt and bodice looked like.

“If we combine elements from the two images, and re-colour according to Mabel’s and Theodore’s description, something like this might be what Efthimia looked like on that January evening… 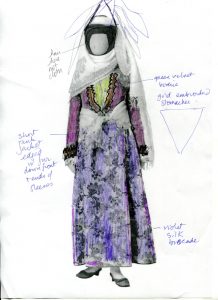 “Anyway, perhaps you would like to visit the island this summer and try and find out for yourselves and let us know!…Of course with your copies of the Bents’ jottings in your hands!”