Theodore in early 1889 in Bahrain (detail from Southern Arabia 1900)

As an example of what he was up to, we have this extract from his notes of 30 March 1889, written up and presented a couple of years later. Taken from Theodore and Mabel’s cavalcade through Iran, south-north, we have Persia with all her fascination; it is written in his best, jaunty style: illustrative, informative, energetic, engaged and engaging. Classic Bent. 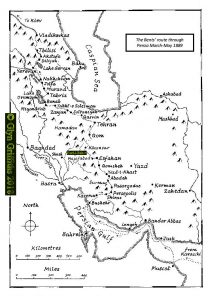 “Certainly, Persia, off the main line of route, is as different as possible from the Persia that the ordinary traveller sees. For two days after leaving Nejifabad we passed through villages nestling in fertility. Each village is, or rather was, protected by its mud fort, built on a hill, around which the cottages cluster – cottages which dazzle the eye with their continuity of mud domes and brown walls. Wapusht looked like a nest of cottage beehives stuck together. Within, the houses were comfortable enough, and bore every appearance of prosperity, for here they are off the routes which soldiers and governors of provinces pass over, and when free from Government extortions Persia prospers.

“On ascending to higher ground we came across a cold and barren district; the howling wind from the snow mountains made us again love those furs which we had considered unnecessary burdens when leaving Ispahan. These sudden changes of temperature are the bane of the Persian traveller, and woe to those who are not provided with artificial warmth. On reaching Kurd-i-Bala [March 30, 1899. The settlement is near modern Varposht, n-w of Najafabad], the first of the manna villages, we found ourselves in Armenian society. Of late years the Armenians in Persia, by foreign intervention, have had their condition greatly ameliorated, and if this state of things is allowed to continue they are likely once more to become the most prosperous of the Shah’s subjects. I was glad enough to warm myself by taking a brisk walk on reaching our destination, and accepted gladly the offices of the Karapiet, the Reis or headman of the village, and our host, who volunteered to take me up the mountain side and show me the manna shrub.

“In the fields around the village the Armenian women were tilling the ground. On their heads they wore tall head-dresses, with flat crowns and silver chains dangling therefrom – very uncomfortable gear for purposes of husbandry – and beneath their bright red skirts peeped drawers with embroidered edges. Armenian women hide only the lower part of the face, deeming it unseemly that the mouth should be shown to members of the opposite sex.

“Kurd-i-Bala is a great village for manna, the ‘gez-angebeen’, as the Persians call it. About twenty minutes’ walk brought us to a gorge in the mountains where acres of the shrub grow. The ‘gez’ tree is a low and parasol-shaped plant of the Tamarisk tribe, never reaching more than 3ft. in height; its leaves are small and sombre in colour, and it has all over it long prickly thorns. On these leaves there comes a small insect, which is red at first, like a harvest bug; later on it turns into a sort of louse, and finally becomes a tiny moth, which, before it flies off, produces a thin white thread, about half an inch long, which hangs on the bushes. This is the manna collectors shake off on to trays, which are put below for the purpose, and the material thus collected they call ‘gez’. They say the insect appears fifteen days before the hot weather begins, and disappears fifteen days before the cold season sets in. Every third day during a term of forty days about August they collect this species of honey from the trees, which forms itself into a white gelatinous mass, and the leaves become covered again with surprising rapidity.

“Karapiet was very proud of his speciality and quite enthusiastic when he described the acres of whiteness this spot presented in the summer time. He said that if you go to sleep under a ‘gez’ tree you will wake up with a coating over you as of snow; if there is a high wind it will certainly be blown to some distance; but the connecting link between this manna and that consumed by the Israelites is lost, if ever there was one. As for the Arabic word manna, it is only known in Persia amongst the druggists, and does not apply to the sweet honey of the ‘gez’ tree, but to certain exudations from the oak and other milky exudations from shrubs which are largely made use of in the Persian pharmacopœia. The villagers evidently drive a highly satisfactory trade in this line, and furthermore, they put the ‘gez’ tree to another use, making tooth-brushes thereof, something resembling the orris-root tooth-brushes one sees in Turkey. A small branch, about six inches long, is frayed at one end, and this is used to scrub with; it is reckoned particularly beneficial and is supposed to produce that ivory whiteness for which Persian teeth are so justly celebrated.” (From: J. Theodore Bent, Village Life in Persia, ‘The New Review’, 5:29 (1891/Oct.): 355-359)

[The photograph shows Theodore in early 1889 in Bahrain; and the map (© Glyn Griffiths) details the Bents’ great ride through Persia in 1889]