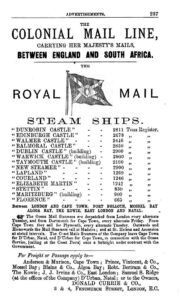 The Bents embarked on a ‘fleet’ of ships during their twenty years of explorations to the Mediterranean, Middle East, and Africa, from 1880 to 1900 (see the interactive maps on this site for additional details).

What follows is in the way of an haphazard flotilla of Bent vessels in no particular sequence. If you have any information, or better still, illustrations, do please contact us. (Scroll down to see a list of ships that will be added from time to time – anchors aweigh!)

“We left England January 30th [1891], that is to say Theodore and Mr. Robert Swan and I, bound for Mashonaland, and Mr. Graham who was going to accompany us as far as Kimberley. The ‘Garth Castle’ was a comfortable ship and with no adventures we reached Cape Town Thursday, February 19th.”

The Bents took about three weeks (30 Jan – 19 Feb 1891) to steam, with stops, from the Channel to Cape Town. The ‘Garth Castle’ (1) was built in 1880 by John Elder & Co. at Glasgow “with a tonnage of 3537grt, a length of 365ft, a beam of 43ft 6in and a service speed of 12 knots”. She took the name of fleet-owner Sir Donald Currie’s estate in Scotland. She was transferred to the Intermediate service in 1890 at the time of the Bents’ trip to Cape Town in 1890/1, under Master H. H. Broadfoot. Surplus to requirements when the companies she was linked to merged in March 1900, she was sold to Elder Dempster & Co. in 1901 for their Bristol to Jamaica service and in the July of the same year chartered to Franco-Canadian Steam Navigation Co. for their Dunkirk – Bordeaux – Quebec run. 1902 saw her being was sold on again, to the Khedivial Mail Steamship & Graving Dock Co. of London, renamed the ‘Ismailia’. She was sold on to Soc. Armatrice Radivo-Frausin of Trieste, renamed, alas, the ‘Brunette’ and broken up in Italy in 1923. 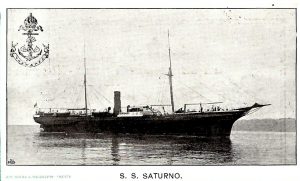 February 1885 – en route from Alexandria for the Dodecanese. “Thursday February [5th]. I am writing against much rumbling of the screw of the Austrian Lloyd S.S. ‘Saturn’. We are having as calm a voyage as needs be but not without its hopes and fears. We [had] left Cairo on Monday evening at 6… and reached Alexandria at [time illegible]. We were greeted with the unpleasant intelligence that the Austrian would not call at Rhodes this week, so we went to bed with the half formed intention of going to Smyrna by a Khedivieh ship and trusting to luck for a passage to Rhodes. However the belated ‘Saturn’ came in early next morning and we left at 4 on Wednesday afternoon… Yesterday it looked quite black all round when we embarked and [it] began to rain and the harbour was full of gulls – 17 sitting in a row on the rope mooring a ship near. So we felt very gloomy knowing that if it were too stormy we should not touch at Rhodes but be carried to Smyrna. But the sun came out and all became bright as we steamed off ‘adagio adagio’.” [Mabel Bent’s Travel Chronicles, Vol. 1, page 67, Oxford, Archaeopress, 2006]

The Bents arrived below Rhodes’ Old Town on Friday, 6 February 1885.

The Austrian Lloyd and the Khedivieh Steam Navigation companies connected the major ports of the Eastern Mediterranean in the late 19th century. Austrian Lloyd started steamship operations in 1836 based at Trieste, which was then under Austrian rule. Initially traded to the Adriatic and later extended to the rest of the Mediterranean, India and the Far East. The passenger/cargo iron-screw steamer the SS ‘Saturno’ was built for the Austrian Lloyd Steam Navigation Co. on the Clyde (launched 11/01/1868) by William Denny & Bros at the Dumbarton, Leven Yard (126). The engine builder was Denny & Company, Dumbarton (and for the enthusiast, with the spec: 1×4 bladed screw, inverted D.A. surface condensing (54 & 54 – 36 in) and 194 nhp). She had a gross tonnage of 1761 (net: 1197) and was 274.6 ft in length, a breadth of 34.0 ft, and with a draft depth of 18.0 ft. She was sold for breaking up in 1908 but there is evidence in her notes that she continued in some sort of service until 1910. 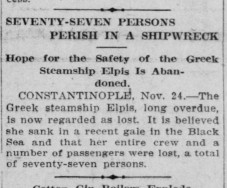 In early March 1884, the Bents are on Cycladic Tinos, waiting for the steamer ΕΛΠΙΣ (ELPIS) from Syros to take them (from the tiny harbour at Όrmos Isterníon) to Andros: “The ‘Praetor’ or agent of steamers gave us coffee and jam and we then rode down a fearfully steep road to the sea. There was a great crowd of 3rd class passengers all seated on the sand and one poor cabin where coffee could be had. The sea was very rough but we had the certainty of the steamer as we could see her come out of Syra harbour. She was a very large one, the ΕΛΠΙΣ, formerly the Truthful. We had a great difﬁculty in getting on board and also in getting off on account of the sea. We had an excellent luncheon and slept below for a couple of hours, having had too much fresh air on the mountains to care to be on deck. We landed at the chora of Andros about. A woman on the boat was so alarmed that she kept hold of Theodore’s hand till she seized his leg and kept that.” (Mabel Bent’s travel Chronicles, Vol. 1, page 48)

The ELPIS was bought by Elliniki Atmoploia, Syros, in 1884. Originally the British screw steamer Truthful of Liverpool, she was a cargo vessel modified to accommodate passengers for routes around the Greek islands and some mainland coastal ports. She was built in Barrow in 1877. In 1893, Elliniki Atmoploia went bankrupt and the ELPIS was transferred to the McDowall & Barbour Co. But she had a tragic end, showing how precarious such early steamers could be in bad weather and what risks the Bents regularly faced. In November 1904, on her way in the Black Sea from Burgas to Varna she foundered in a gale with the loss of all hands and passengers, as reported by the San Francisco Call (Vol. 96, No. 178, 25 Nov. 1904): “Seventy-Seven Persons Perish in a Shipwreck: Hope for the safety of the Greek steamship Elpis is abandoned. Constantinople, Nov. 24 [1904]: The Greek steamship Elpis, long overdue, is now regarded as lost. It is believed she sank in a recent gale in the Black Sea and that her entire crew and a number of passengers were lost, a total of seventy-seven persons.”

“In 1835 the French Government created a state owned steamship service between Marseilles and the Levant. This continued until 1851 when it was transferred to the management of Messageries Nationales (the state operated road communication concern). The shipping side of the business was split from the road activities in 1852 under the name Compagnie des Services Maritimes des Messageries Nationales. With the return of the French monarchy in 1853 this became Compagnie des Services Maritimes Imperiales and the company expanded dramatically over the next few years and by 1857 owned 57 ships. After the Franco-Prussian War and the abolition of the monarchy in 1871, the company became Compagnie des Messageries Maritimes, usually shortened to MM.” (From the invaluable The Ships List)

“February 9th 1887. I have certainly a strange enough place to begin this Chronicle in! and one I never hoped to reach. No less than one of the convents situated on ﬁnger-like rocks in Thessaly and therefore called Ta Metéora, or the Meteors i.e. the Airy. This is Agios Stephanos. Most of them you can only reach by being hauled up in a net, but this has a bridge over a deep chasm, 12 feet wide. Well, here I sit by the prostrate Theodore, who is on the ﬂoor with a fever, while Manthaios [their Anafiote assistant] and I have only colds – mine a very awful one in the head. But I think I will go back and write that we left England on January 26th, Wednesday, and stayed 2 days in Paris, leaving Friday 28th at night and embarking at Marseilles for our 4th voyage on the Cambodge next day.” (The Travel Chronicles of Mabel Bent, Vol 1, Oxford 2006, p 185)

The MM Cambodge it seems was formerly the Cerdagne, built in 1861, 2,205 tons (“Lancé le 11 mai 1861 à La Seyne”). A few months after the Bents’ last voyage on her she was converted to cargo only, before being scrapped in 1902. She plied the long route, and French colonial interests, to the Far East via Suez. Full details and specifications can be found at Philippe Ramona’s essential website.

The Bents’ ships (now and then Mabel fails to record the names of vessels, so this is not a complete list):

1897: Sadly, the name of the last ship the Bents returned to France on from Port Said is not recorded. Bent died shortly after returning to London from Marseilles in May.