‘Few who see Mrs. Theodore Bent for the first time would dream that a woman so apparently fragile and so essentially feminine could be one of the most daring of travellers and adventure-lovers. It is almost more easy to say where Mrs. Bent has not been than where she has travelled. She has explored Asia Minor in its wildest recesses, and is familiar with the remotest by-ways of Persia. She knows Arabia better than West London; and in fact has roamed almost everywhere from the Cyclades to Central Africa, while she has faced death in a hundred forms. And yet so adaptable is this charming lady that when you see her in her home in Great Cumberland Place you might pardonably think that she had never wandered more than a hundred miles from her drawing-room, so naturally does she fit her environment.’ 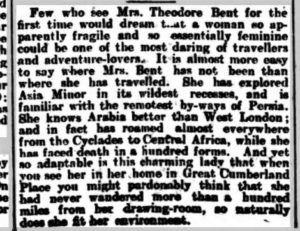 Well, here is a find – this brief paean – the sort of thing to bring a smile to the face of the amateur archaeologist, the detectorist of  Bent references. There are only two such known, one in the Nuneaton Observer  of Friday, 9 October 1903, and ours, from none other than the Bromyard News & Record of Thursday, 8 October 1903.

It would, by the way, have to have been a Thursday – the BN & R only appearing on that day, Thursday, price 1d, a penny in old money, worth (and worth it), say,  1 GBP today – and published by one Vincent B. Weeks from his home at 37/38 Rowberry Street (now a listed building) Bromyard, launching in July 1897, and offering its readers a ‘full report of the local news, with the general intelligence and varieties, &c. The only local paper of the district.’ Bromyard, being something of a backwater (then as now one assumes) between Worcester and Leominster (south-west of Birmingham), and unlikely to support more than one ‘penny dreadful’.

All this is really to ask why on earth such a Mabel Bent cameo would appear in such a modest paper, and at that time? Searches turn up no significant newspapers or magazines it might have been taken from. Did Mabel arrange it herself, or via an acquaintance? The editor himself, perhaps? And why?

The Bents were, indeed, very much in the habit of generating their own ‘press releases’ prior to setting off on any of their annual expeditions overseas, and also regularly reporting on their progress to the English press, often with syndications to the US and elsewhere, on their doings in the E. Med, Africa, or Arabia. Mabel would have been very familiar with the process.  She may have been in need of some good PR too; at the time, late 1903, she had become embroiled in something of a scandal in Jerusalem and was rather in the public eye!

Hats off to Vincent B. Weeks and the Bromyard News & Record.  Whatever, the archaeological context, our find is a valuable one – those wanting a succinct recipe for Mabel, with a dash of hyperbole, could do worse than copy it down…