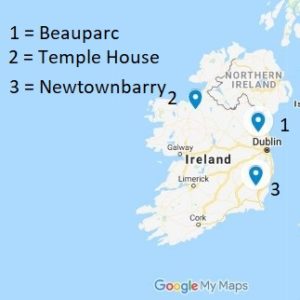 Home 1: Beauparc, Co. Meath – On 28 January 1847, Mabel Virginia Anna Hall-Dare (d. 1929) was born in Beauparc House to Mrs Frances Anna Catherine Hall-Dare (c. 1819-1862) and Robert Westley Hall-Dare (1817-1866). Frances was the daughter of Gustavus Lambart, of Beauparc, and his wife Anna (née Stevenson). Retaining all her life an affection for  the house, lording it over the Boyne, the mansion was built in the 1750s for the Lambart family, who retained it until the last Lambart, Sir Oliver, ‘a wonderful if somewhat retiring and eccentric individual’, died in 1986, leaving it, to the new owner’s ‘total and utter astonishment’, to Henry Conyngham, 8th Marquess Conyngham (born 25 May 1951) – dubbed (Wikipedia): ‘…. the rock and roll aristocrat or the rock and roll peer owing to the very successful series of rock concerts he has hosted since 1981, held in the natural amphitheatre in the grounds of Slane Castle [Slane falls within the estate, a few miles away across the river]… These concerts have included performances by The Rolling Stones, Thin Lizzy, Queen, U2, Bob Dylan, Bruce Springsteen, David Bowie, Guns N’ Roses, Oasis and Madonna.’ Not too sure how Mabel would have taken to ‘Start me up’ rocking in over the Boyne, but who knows?

Home 2: Temple House, Co. Sligo. You can’t stay with your in-laws forever, perhaps, and the Hall-Dares were soon looking for an estate of their own; Robert’s father being a very wealthy Essex landowner and Demerara sugar-plantation owner.  In the late 1850s, therefore, the growing family decamped from Beauparc, purchasing Temple House from the Percevals, at a discount, the latter in some financial discomfort. It was not to remain with the Hall-Dares for long, however: in 1861 Mabel’s father assaulted his gamekeeper’s wife and spent a month in Sligo gaol for his crime. Disgraced, he resold the house and lands to the Percevals – and delighted were one and all to see them back, for the Hall-Dares: ‘had a very different view on their duties and became notorious for evicting many families.’ Still magnificent and happily in Perceval hands, the fine house is now a luxury hotel – you can relax in grand style where Mabel spent her early childhood. Looking at the wonderful main stairs from the hall, it is easy to imagine the Hall-Dare children playing happily along them…

Home 3: Newtownbarry, Co. Wexford. Robert, never down for long, moved his wife and several children 230 km across country down to Co. Wexford, and the village of Newtownbarry (now Bunclody). ‘For its size,’ boasts the 1885 Wexford County Guide and Directory, ‘there is no town in the County Wexford to compare with Newtownbarry. As a business place, its record is first-rank, and in scenic attractions it stands in the front rank. It is situated on the right bank of the Slaney, bordering the County Carlow, seven miles Irish from Ferns, the nearest railway station, nine miles English from Shillelagh, in the County Wicklow; ten miles Irish from Enniscorthy and sixteen miles Irish from Gorey. Originally it was called Bunclody. Clody, in Irish, signifies a mountain torrent, and bun is butt…’ [Bassett’s Wexford County Guide and Directory: a book for manufacturers, merchants, traders, land-owners, farmers, tourists, anglers, and sportsmen generally (George Henry Bassett; Dublin: Sealy, Bryers, and Walker, 1885, p.343).

Hall-Dare bought the rather modest house in the estate grounds from the Maxwells in 1861/2, and promptly set about enlarging it, although he died in 1866 (as an in-patient in the up-scale asylum for distressed gentry, Ticehurst House Hospital, East Sussex), never seeing its completion. Three other deaths must also have hit the young Mabel very hard – that of Frances, her mother in 1866, from what seems to have been ovarian cancer, the apparent suicide of her younger brother Charles, a single pistol-shot, just the other side of Worcester railway station, on 31 January 1876 (three days after Mabel’s birthday), and the death in Rome (from typhoid) of her elder brother Robert a few months later, on 18 March 1876. Despite these tragedies, Mabel remained at Newtownbarry until her marriage to Theodore Bent in 1877, and to them one might look for Mabel’s need to travel, to be somewhere else as soon as she possibly could, marriage her ticket. Solid-looking Newtownbarry House, in conversation ever with the trouty, brown Slaney just below it, was designed by the well-known Belfast architect Sir Charles Lanyon between 1863-69; it is still in family hands, Mabel’s great-niece being the current owner.

Before we leave the amiable village, let’s take a stroll with George Henry Bassett: ‘Newtownbarry has many beautiful walks, but the one which is most favoured by the people is that leading off the Market Square over the bridge. Steep steps connect the public road with the river-path. Following this a few hundred feet a scene of rare loveliness is presented. Rich pastures extend far into the distance, skirted by a hill, which rises precipitously, a mass of foliage marked with every variety of color, and crowned by spike-like firs. On the left is the Slaney, deep and black in its shadows, silver-blue where it reflects the skies, its whisperings interrupted by the occasional leaping of salmon. Looking back to the road, the arches of the bridge, and their clear shadows, form circles which frame in charming bits of landscape. The residence of the Hall-Dare family is almost shut out from the view by trees. It is a mansion of extensive proportions, in the Italian style of architecture. At the end of the long stretch of pasture a stile is crossed, and the paths diverge. One goes down to a favourite bathing place of the boys, the other into the deep shades of the trees on the hill.” – Bassett’s Wexford County Guide and Directory: a book for manufacturers, merchants, traders, land-owners, farmers, tourists, anglers, and sportsmen generally (George Henry Bassett; Dublin: Sealy, Bryers, and Walker, 1885, p.349).

Click here for other stylish properties associated with the Bents.