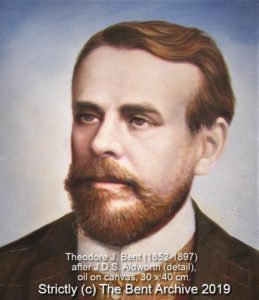 We are delighted to update this post with a wonderful addition to the Bent Archive gallery – at last, the lost oil! And by way of tribute to a real artist –  ‘Miss J. D. S. Aldworth’ !

For those interested in the background to this painting, read on!

(Or, more accurately really, the knowledge that there is a portrait of Theodore that has been lost, has been discovered.)

Here at the Bent Archive, snippets of biographical information about Theodore and Mabel turn up all the time. On one of our regular trawls through the Irish newspapers, the following few lines from the Dublin Daily Express (1 August 1898) came to light after lying on the sea floor for some 120 years:

‘Miss J. D. S. Aldworth, an Irish artist who is rising to distinction in London, has had the honour of submitting to her Highness the Duchess of York the pastel painting which she presented to be sold for the benefit of the Princess Mary Village Houses. Miss Aldworth studied first in London, and subsequently in Paris, under M. R. L. Fleury… and has exhibited in the Royal Academy, the Institute of Painters, the Royal Hibernian Academy, and other shows. Miss Aldworth. who belongs to a well-known Cork family, is a successful portrait painter in oils and pastels, and adds another name to the long roll of talented Irish artists. Amongst the best portraits in oils we may mention that of the late Theodore Bent, F.R.G.S., F.S.A.’

Now, to us, this is of more interest than the Antikythera Mechanism (retrieved from the deep but a few sea miles from where Theodore dug on Antiparos in 1883/4)! For we now know there is a missing portrait of Theodore to be tracked down. Did Theodore own it? Was it left to Mabel’s sisters and nieces on her death in 1929? All this is to be found out and published.

Two sidetracks can be pointed to.

What of the artist? Jane Dorothea Sophia Aldworth was born on 15 April 1861, the daughter of Colonel Robert Aldworth and Olivia Catherine Morton – a distinguished family from Co. Cork. After training in France, Jane returned to London and Dublin (inter alia) to paint and sculpt. A society artist, Jane, of course, found time for Cheltenham, and the Cheltenham Chronicle for Tuesday 21 September 1880 notes the Aldworths arriving at 38 Lansdown Crescent: ‘Col. and Mrs. Aldworth, Miss J. D. S Aldworth, Mr. St. Letter B. Aldworth. Mr. J. J O. Aldworth…’ By 1894/5 Jane had a London base at 37 Seymour Street, and featured her work in a catalogue of the 12th exhibition of the Institute of Painters in Oil Colours (it seems her picture of Theodore was not exhibited). In 1898 we have the article reference in the Dublin Daily Express quoted above. In 1905/6 she exhibited a piece (and offered it for sale at £5.5.0) called ‘The Spirit of the Rose’ at the Royal Hibernian Academy Annual Exhibition.

The Cheltenham Looker-On of Saturday 23 February 1907 has a dismissive view of one of Jane’s pictures on show at the Cheltenham and County Fine Art Society:

‘Amongst other painters who have contributed works of more or less merit, which want of space prevents us from criticising at length, are the following :- A. M. Bryant, A. K. Meadows, Sydney Scott, Rose Willis, W. W. Stephens, Col. Penrose Thaekwell, T. Mesham [and] J. D. S. Aldworth.’

Perhaps, in the end, Jane is better remembered for her charity work than her art. The next we hear of her is a letter in the Dorking and Leatherhead Advertiser (Saturday 28 October 1911): [To the Editor.] Sir, In response to my letter last winter asking for gifts of books, toys, dolls, etc., to send to the Church of England Waifs and Strays and Dr. Barnardo’s Homes, many of your readers kindly interested their young friends, and were able to send several hundred toys, thus bringing joy to many young hearts. I hope this winter we may enlist further sympathy and make a still larger collection. Toy cupboards might now be turned out in anticipation of Christmas, last year’s Christmas cards made into scrap books, dolls re-dressed, etc., and so many less fortunate little brothers and sisters would be enabled to have share in our Christmas cheer. I shall be grateful for all contributions of toys, new and old. They should sent in not later than Saturday, December 3rd. — Yours, etc., J. D. S. Aldworth. Claremont, Dorking.

But what of this missing oil painting of Theodore Bent? Suffice it to say, it would be wonderful to locate and exhibit it – pride of place in the RGS Gallery, London. There are few likenesses of Theodore, Mabel’s efforts as expedition photographer were, frankly, undistinguished, and very few have survived because of technical difficulties. Sadly, a large number of her glass slides used for Theodore’s lectures were thrown away in the early 1950s, as being too damaged or faded to make further use of – today they could perhaps have been restored.

Jane’s missing portrait has a date referenced above of 1898, with Theodore having died in May the year before. So when did Theodore pose for Jane? Mabel used a fine studio photograph of her husband for the frontispiece of her account of the couple’s Arabian explorations, Southern Arabia, published in 1900. In all likelihood, this photograph of Theodore, and Jane’s portrait, were executed in the mid 1890s, when Theodore was in his early 40s. 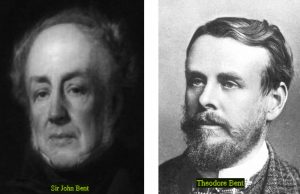 As for how he may have looked in Jane Aldworth’s portrait, let’s stretch our imaginations and look at details from the photograph referred to above and a detail of a fine painting of Theodore’s uncle, Sir John Bent (1793–1857), erstwhile brewer and Mayor of Liverpool. The oil painting of Sir John was done in 1855 by Philip Westcott (1815–1878) and hangs today in the Walker Art Gallery, Liverpool. Looking for a resemblance (and bearing in mind an age difference of some 20 years), can we see family similarities in the eyes and brows? If Jane had painted Theodore at 65, not 45, might he have looked like the portrait of Sir John? But the missing picture, when we find it, will look like the studio photograph published by Mabel in her book of 1900.

So, if you see an unattributed oil painting at auction that has the eyes (though younger) of this sitter – buy it! It is this lost painting of Theodore Bent! Or, of course, if you own it now, or have any further information on Jane Aldworth – do let us know. Jane’s likeness of Theodore may be no oil painting, but we would love to see it!