There is no denying that Theodore Bent worked incredibly hard: if not travelling he would be planning the next expedition, fund-raising, researching, writing up, or lecturing. For the approximately twenty years of his travels (coming to style himself more and more as an ‘archaeologist’) he would return to London in the spring of each year (with the odd exception) and immediately begin to think of publishing and publicising his finds – he had always depended much on self-promotion and PR for the funding and support of his subsequent researches; he had good contacts with the press and would submit progress updates to them assiduously from far-flung outposts, via Reuters and other agencies. 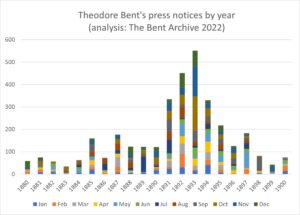 An unscientific trawl through the press cuttings of the time shows how Theodore reached the peak of his ‘fame’ in 1893-4, after a trio of consecutive hits – Great Zimbabwe, Aksum, and Wadi Hadramaut. He and his wife were soon London celebrities and news and details of their adventures was syndicated widely at home and abroad.

Mabel was tasked with sorting out her photographs and ensuring that they were ready for transferal to lantern-slide or printer’s plate. There was also the constant process of unpacking and caring for case after case of acquisitions: archaeological, ethnographical, botanical, and zoological. The couple would quickly make decisions on what they wanted to keep for themselves, and exhibit in their London townhouse, and what they would offer to museums (for a remuneration if possible).

What is particularly striking is how quickly Theodore would settle to study and write up his monographs (frequently asking other specialists for contributions). His hard-pressed publishers (mostly Kegan Paul and Longmans) usually had them announced and on bookshop shelves within six to nine months of Bent’s return from the field.

And within short weeks of reaching home again – from the Levant, Africa, or Arabia – Theodore was ready to give talks and lectures, all over the UK, to the relevant grand institutions of the day, and before the great and the good (in the spring of 1892 even William Gladstone came along to hear). Mabel’s job was to have the lantern-slides ready, and any artifacts neatly labelled for display.

Other display aids might be needed – perhaps a 3D model (e.g. of his famous ‘Elliptical Temple’ at Great Zimbabwe), and then there was the commissioning of maps from the famous London cartographers Edward Stanford to be seen to.

What follows here, taken from newspapers and journals, is a chronological list (with no claims to completeness) of Theodore’s talks and presentations, giving a very good sense of the explorer’s Yorkshire-bred proclivity for hard graft. An interesting additional discovery seems to suggest that there was even an attendance charge for his talks in the provinces! The Newcastle Daily Chronicle for 2 March 1892 records that to hear Theodore lecture in Tyneside would cost you the equivalent of c. £3 today for a seat in the main hall, or c. £1.50 in galleries – money well spent! At another event we hear that Theodore’s ‘remarks throughout were admirably illustrated with a large series of photographic and other views of the places which were visited on the tour. The photographs were the production of Mrs. Bent, and incidentally Mr. Bent mentioned, in apology for some of the views which were somewhat wanting in sharpness, that the technical difficulties of photography, on account of the intense heat and other causes in Arabia, were almost inconceivable.’ (Wharfedale & Airedale Observer, 19 October 1894). Complete sets of Mabel’s lantern-slides survived until the early 1950s, when they were discarded by the Royal Geographical Society, deemed too faded and damaged to merit keeping. A huge loss.

It takes very little imagination today to see Theodore in front of the camera presenting a sequence of his own mini-series – The Eastern Mediterranean and the Levant, The Persian Gulf, Africa North & South, and Southern Arabia. Let’s hope one day they will appear – on National Geographic perhaps!

1885 [The Bents in the Greek Dodecanese]

1886 [The Bents in the Eastern Aegean and Turkey]

1887 [The Bents in the Eastern Aegean and Turkey]

1888 [The Bents in the Eastern Aegean and Turkey]

1890 [The Bents in the Eastern Aegean and Turkey]

1892 [The Bents return early in the year from South Africa, leaving for Ethiopia at the end of it]

1893 [The Bents in Ethiopia until early spring, leaving for the Yemen at year end]

1894 [The Bents make their first foray into the Yemeni interior, being home in the spring. They return to the region (via Oman) at the year end]

1896 [The Bents return from the Sudan in the spring and leave for their last trip together, to Sokotra and Aden, at the year end]

The above, it seems, was Theodore Bent’s final lecture. The lantern flame flickers and disappears.

Note 1: See Bent’s Bibliography for the texts of many of these talks/lectures.
Return from Note 1