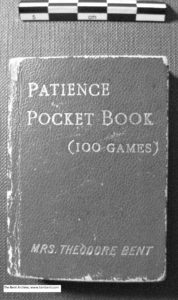 On 21 December 2017 an email arrived in the Bent Archive inbox; an enquirer wrote:

“I have in my possession a little book (roughly 2 inches x 2.5 inches) by Mrs. Theodore Bent titled ‘Patience Pocket Book’, can you tell me anything other than is listed on your website quite briefly? It states it was published by J. W. Arrowsmith of Bristol, printed in London: Simpkin, Marshall, Hamilton, Kent & Co. Limited… It is a fascinating little piece of history and one would assume it kept Mabel amused during her mourning period, however given that it was ‘different’ to her other works what do you know about its fruition?”

We replied the same day:

“Thanks so much for your interesting email: you are lucky to have a copy of this rare little book! Sorry, we can’t add much other than the same sort of ideas you will have. It seems that Mabel and Theodore liked to travel with cards to amuse themselves now and then on their travels over many years, so we can assume that Mabel would have played from an early age with her brothers and sisters in Ireland, and, as you say, would then have continued with ‘patience’ in her widowhood…The Bodleian Library has a copy of the book and inside is a folded letter from Mabel dated just ‘May 6’ to the card-game specialist and collector F. E. Jessel, who was keen to see Mabel’s ‘little whist markers’. She writes that she would have replied to him earlier, but having “…only just come home from Jerusalem…I wonder if you could call tomorrow afternoon after 4 as then I am sure to be at home. If not we must fix another time. Yours faithfully, Mabel V. A. Bent”. Jessel included Mabel’s book in his standard English bibliography on playing cards (1905, 18, item 100).”

Just over a year later, thanks to the generosity of John Beale, a copy of this very rare and tiny book is now in the Bent Archive’s collection. It was published in Bristol in 1903/4 by J. W. Arrowsmith.

The title page proclaims: ‘A Patience Pocket Book, plainly printed, put together by Mrs Theodore Bent’, and as Mabel’s preface explains: ‘This tiny booklet, with its hundred games, condensed into few words, recommends itself by its plain print, small size, and light weight. It hopes to be your constant companion as a reminder of games, which you, perhaps already know, as many of them are very ancient but of which it is easy to forget the details. it will be as simple for a Patience player to understand as a knitting book is for a Knitter, and to beginners, the unravelling of its mysteries will be a new game of Patience.‘ Judge for yourselves, here are Mabel’s ‘Rules and Abbreviations’ in her own words: “In counting the value of cards, A. counts 1, Kv. 11, Q. 12, K. 13. Ace packets are always piles in ascending sequence, i.e. Ace, 2, 3, &c. (Asc. seq.). King packets in descending sequence (desc. seq.), i.e. K., Q., Knave, &c. Sk., or Stock, means all the cards, one or more packs. Lines are perpendicular; Rows are horizontal. R.H., or Rubbish Heap, on which cards are played, which cannot at the time be used, and which gradually must be worked off. Piquet pack excludes all below 7. If you want to divide the packs and play a 1 pack game, after having used 2 packs, take out 4 suits, without minding if they all have the same backs. When all the cards are thus in suits it is easy to take out the low cards for a Piquet pack. One may help one’s self by Running Cards. When the Ace and King packets of one suit have respectively 6 and 7, move the 7 from the King packet, or pile, to the Ace pile, and continue till a place is found for (say) a 10 on the Ace pile, or vice versa. F.S. means Follows suit; N.F.S., Not Follows suit. With the help of these rules beginners will soon become experts.’

Of several reviews at the time, this one from The Queen, the Lady’s Newspaper (Jan. 16, 1904, page 105) stands out: “Patience Pocket Book. A hundred games put together by Mrs Theodore Bent (Simpkin, Marshall, Hamilton, Kent and Co., London; J. Arrowsmith, Bristoi). 1s. —Bridge may come Bridge may go, but depend upon it, Patience goes on for ever, or, at all events, will for a very long time. This clever little book, just 3 inches by 2 inches, should find a place on every drawing-room table, and in every travelling bag when starting for abroad. The preface describes the principles on which the details of the hundred games are condensed into few words, and the rules and abbreviations are so simple that a child could easily compass them. The result is that the several kinds of Patience are described in as few words as it is possible, and the selection is a most excellent one. At hotels at home and abroad you see people with their Patience boards, devoting their evenings to the game; and here is a friend and companion that will make the players acquainted with many sew variations, and give plentiful amusement. Mrs Theodore Bent is wont to do what she undertakes well, a fact that this little book amply proves.”

Mabel ran a small bookshop in Jerusalem in the early 1900s and presumably this miniature volume, the size of a biscuit, would have been stocked there, perhaps with her other book, the very esoteric Anglo–Saxons from Palestine; or The Imperial Mystery of the Lost Tribes (London: Sherratt & Hughes, 1908), the reading of which, indeed, requires great patience!

We also know Mabel was interested in other card games, e.g. whist. In 1904, from Hughes’ Hotel, Jaffa Street, Jerusalem she wrote to the popular magazine Notes and Queries a brief note: “I have a little charm, which may be fifty years old, with whist markers bearing portraits of Edmond Hoyle.” (Hoyle (1672-1769)being the English writer best known for his works on the rules and play of card games.)

(Mabel’s Travel Chronicles have been published by Archaeopress, Oxford, in 3 volumes)

One thought on “Mabel and the Virtue of Patience”