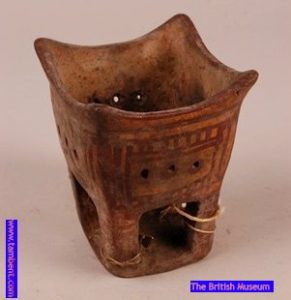 The pottery incense-burner, intended for frankincense and other aromatic resins, that the Bents brought back from the Wadi Hadramaut in 1893/4. It remained in Mabel’s possession until 1926, when it was donated to the British Museum with four others (As1926,0410.37-41). Although the item shown is not currently on display, there is a chance you can see one in the BM, a wooden example (41).

For famous travellers, the Bents preferred to be homebirds come Christmas time, swapping solar topees for deerstalkers, and quitting their London townhouse at 13 Great Cumberland Place for their country place at Sutton Hall, Macclesfield, or Ireland (Mabel’s family home at Newtonbarry, Co. Wexford). Of their nearly 20 years of explorations (in the 1880s and ’90s), they were only out of the country on 25 December, or so the archives indicate, for 1882 (Chios – for Orthodox Christmas), 1883 (Naxos), 1891 (steaming home from Cape Town), 1893 (Wadi Hadramaut), 1894 (Dhofar), 1895 (Suez), and 1896 (the island of Sokotra).

Appropriately, these 1890s tours at Christmas time took them to the lands of gold, frankincense, and myrrh, or associated finds they could link to Theodore’s theories of trade links and contacts between the populations of Southern Arabia and the various regions around today’s Ethiopia, Mozambique, and Zimbabwe. In particular it was the famous frankincense (a fragrant gum that dribbles from several species of ‘Boswellia’) trail, and the branch that began in Dhofar, that fascinated the explorer. Bent wrote several articles on the subject, including ‘Exploration of the Frankincense Country, Southern Arabia’ for The Geographical Journal, (Vol. 6 (2) (Aug), 109-33), and ‘The Land of Frankincense and Myrrh’ for The Nineteenth Century (Vol. 38 (224) (Oct), 595-613).

We won’t quote from them, tho they are both worth tracking down, but rather let’s let Mabel fill in some Christmas 1894 details from her ‘Chronicle’. The couple are in their camp on the far coastal regions of Dhofar; Mabel is entertaining and they do well, of course, in not celebrating Christian rites in front of their Muslim hosts:

“Christmas Eve [Monday, 1894]. On waking, the smaller boy came to kiss my hand and before I was up the ladies said they were coming. I was afraid to put them off. First I sat up and put on a jacket, and finding time allowed, I put on a skirt and got up. Combed down my hair and feeling sure that stockings would not be missed, I sat with bare feet, refreshing my memory with civil speeches. About 6 came, very smart with bourkas on their faces a sort of square frame of gold braid and spangles, with a black stick down the middle. They had a great deal of coarse jewellery on with mock pearls and very bad turquoises. 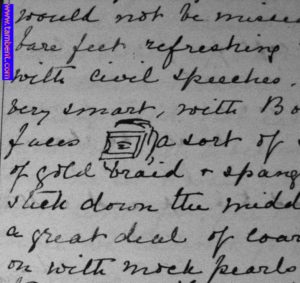 “About 6 came, very smart with bourkas on their faces a sort of square frame of gold braid and spangles, with a black stick down the middle.” (Mabel’s own doodle drawn in her ‘Chronicle’ as she wrote. The archive of the Joint Libraries of the Hellenic and Roman Societies, London)

Christmas Day [Tuesday, 1894]. We rose with the sun and walked off to a mass of ruins about a mile off. There was a great deal of vegetation and sheets of a most lovely creeper with a large flower, white when new, pink when older, and then there comes a red pear-shaped fruit, with hot seeds in it. The ruins are Himyaritic and reminded us of Adulis and Koloe in Abyssinia… returning we sat in a grove of coconut palms and drank much water from the nuts, which were showered from the trees in rather a terrific way. The men stuck their throwing sticks in the ground and by banging the nuts down on the points skinned them.

[Wednesday] December 26th [1894]. I was asked to go down to the harem early. The ladies had not so much finery on. They were most kind and gave me many things to eat, coffee, awfully sweet, and sherbet of orgeat, ditto, halweh and pahpa and nutmegs broken up and some seeds and some leaves called tamboul, and chunam, and things I did not eat for I do not want my teeth to become red… We had 2 more days of waiting and, at last, were told we should positively start on Saturday 28th and were expecting at least to start in the evening, but when at length all the camels were got together there were no ropes, sticks to tie the loads to, or any other thing, so we had to wait till next day.

Leave Dhofar. Sunday 29th December [1894]. We set off at 12. There was the greatest confusion over the loading; neither men not beasts were accustomed to deal with anything but sacks of frankincense. The camels roared incessantly, got up before they were finished and shook off their loads, or would not kneel, or ran away loaded, and then there was a great deal of unloading and abandoning everything and shouting and quarrelling and much difficulty about making up saddles for us. Theodore and Imam Sheriff and Hassan and I each have a separate camel and 6 of the servants ride in pairs while one walks.

New Year’s Eve [Monday, 1894]. Did not get off till 10, though we breakfasted before sunrise… Theodore’s camel was a very horrid one and sat down occasionally and you first get a violent pitch forward, then an equally violent one back and a 2nd forward; this is not a pleasant thing to happen unexpectedly…We were all most dreadfully stiff and tired and again too late to do anything in the way of unpacking more than just enough for the night. The quantities of flowers Theodore has already got must, I think, already exceed all the 150 of last year [in the Wadi Hadramaut]. There are a great many lobàn trees, or rather shrubs (frankincense)…” (extracts from The Travel Chronicles of Mabel Bent, Vol. 3, pages 249-50, Archaeopress 2010)