We are delighted to announce for our site over the coming months a short, Theodore and Mabel Bent-related series of ‘incidentals’ covering the Cycladic island of Anáfi, presented by anthropologist and Anáfi expert Professor Margaret Kenna. Margaret is a retired social anthropologist from Swansea University who has been carrying out research on Anáfi, and among Anáfiot migrants in Athens, since 1966. She has written two books and many articles in English about her research: Greek Island Life: Fieldwork on Anafi (2nd edition 2017, Sean Kingston Publishing), and The Social Organisation of Exile: Greek Political Dissidents in the 1930s (2001, Routledge). A Greek translation of the second book was published in 2004 by Alexandreia Press. Many of her articles, in English and in Greek translation, can be found on the websites: academia.edu and ResearchGate. She has also written several booklets which can be found in tourist shops on the island: Anafi: a Brief Guide; Anafi: Island of Exile; The Folklore and Traditions of Anafi, and The Traditional Embroideries of Anafi. She was made an Honorary Citizen of the island in 2006.

We begin Professor Kenna’s thyme-scented series with ‘Adventures getting to, and leaving, Anafi: 1884 and 1983’, comparing Margaret’s own reminiscences on the island’s (in)accessibility with those of Theodore and Mabel, through a lens of 100 years. We very much hope you enjoy what follows and decide to look out for forthcoming Anáfi ‘talks’ soon on our site; by all means send in your comments to the Bent Archive!

“In early January 1884, Theodore and Mabel Bent spent sixteen hours on a caïque travelling from Santorini to Anafi. They landed at around two o’clock in the morning, at a little inlet about two hours away from the village (Theodore describes it as on ‘the north side of the island’, but it is, more accurately, on the north-west coast, north of the fertile western area known as Vayia). This inlet, identified as Prassa, was until a few decades ago used whenever adverse winds and bad weather prevented vessels from getting to the main harbour of Ayios Nikolaos on the south coast of the island.

“Being opposite Santorini, and thus likely to have received stones, rocks and lava from its volcanic eruptions, the inlet has some very striking rock formations:

“While Mabel’s diary (courtesy of Gerry Brisch (Bent 2006: 33)) notes that, once landed, they scrambled over ‘thorns, stones, rocks, and streams’ for an hour before they found a chapel where they could take shelter and spend the rest of the night, Theodore omits all the scrambling and notes his appreciation of ‘those churches, which are dotted everywhere over the islands for benighted wayfarers like ourselves’ (Bent 1885: 44). After this very ethnocentric observation, he comments on the small size of the chapel and its mud floor on which they slept with stones for pillows and their travelling rugs as blankets (also noted by Mabel). No mention at all is made by Theodore of the ‘old man whose son-in-law had died on Anaphe’ who was on the caïque with them, according to Mabel, and had come over ‘to fetch his daughter’. This human interest story is omitted by Theodore, who simply tells us that in the morning they sent their ‘manservant’ (and guide and translator), identified by Gerry Brisch as Matthaios Simos (himself from Anafi), to the village to get mules. While waiting for him to return, they breakfasted on some bacon they had with them, cooked over a brushwood fire. They set off for the village, taking with them mail for the villagers, for which the island had been waiting for two months.

“Almost one hundred years after the Bents arrived at Prassa, when bad weather in April 1983 prevented the steamer from approaching Ayios Nikolaos, five of us, four adults and a four-year old child, had to cross the island on foot to Prassa. Our luggage was on donkeys, for in those days, as in the Bents’ time, there were no roads and no wheeled vehicles (although there was electricity in the village, and a few telephones). Having hurried along rocky paths and across country for several hours, we arrived at Prassa. There, while the steamer waited out at sea, we jumped from a flat rock, which served as a landing stage, into a dinghy, which rowed us out to the steamer, and then collected supplies and a mail bag. Luckily, not an adventure to be repeated as now there is a more-or-less wind-and-weather-withstanding jetty at Ayios Nikolaos harbour. 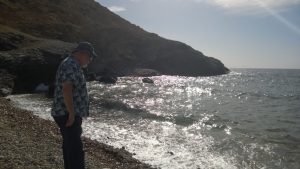 Prassa in May 2016: the ‘landing stage/embarkation’ platform is the large, sunlit, pale grey, rock sticking out from the cliff in the centre of the picture (photo: Margaret Kenna) 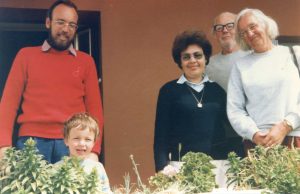 Spring 1983: on Anafi, some of the party, with local friend (in black) just before the cross-country trek to Prassa (photo: Margaret Kenna)

“The Bents had to cut short their stay as the weather was fine and the caïque was waiting, so they were only on the island for two days (9th to 11th January). They collected mail to take to Santorini, and Mabel reports that they were accompanied by the old man, his widowed daughter and her baby (so we do know a little bit more about that human interest story), and Matthaios Simos’s cousin, Margarita.” 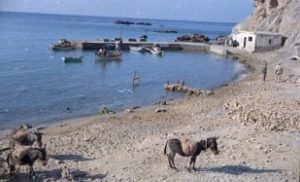 The harbour of Ayios Nikolaos in summer 1966. It is likely that only the very short jetty would have existed when the Bents left the island on 11 January 1884 (photo: Margaret Kenna) 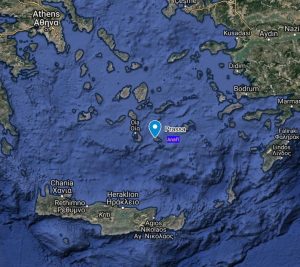 An isle in context. Map showing the tiny island of Anafi in the Cyclades. Prassa is on the north-west (map: Google)

2 thoughts on “Incidentally I: Margaret Kenna, and the Bents on Anáfi in 1884 – Adventures getting to, and leaving”