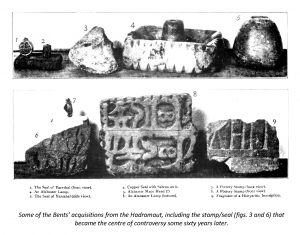 Did Mabel for some reason bury at Bethel, in the early 1900s, the clay stamp she and her husband acquired in the Hadramaut (Yemen) in 1894? Were there two identical stamps after all? And the missing squeeze? Where is this material now? A remark in the literature that the stamp might be in the Amman Archaeological Museum can be discounted (pers. comm. 2022).

Read the full story in Mabel Bent and the Bethel Seal and send us your likes and dislikes! Mabel’s own on-the-spot ‘Chronicles‘ provide further details. 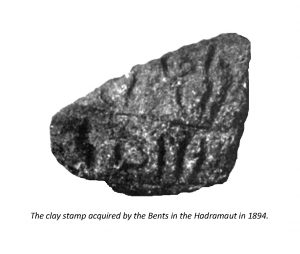 And did perhaps the same fate befall the mysterious ‘Seal of Yarsahal’ (a Hadramaut king?) (illustrated right) bought by the Bents in the region at the same time, and returned to London with them. It is illustrated in ‘Southern Arabia’ too, but has long since disappeared. Did Mabel also leave it somewhere in Palestine as a token to her dead husband? Who knows?

One thought on “Mabel and the vanished ‘Bethel Seal’ – a controversy still?”