Some recognition, after 137 years, for the skeletal material excavated in 1883/4 on the Cycladic island of Antiparos by Theodore Bent. 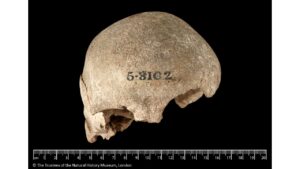 Theodore Bent’s first rung on the archaeologist’s ladder, as it were, is represented by his few weeks in late 1883 and early 1884 excavating some prehistoric graves on Antiparos in the Greek Cyclades (see map below). Bent writes “I was induced to dig at Antiparos, because I was shown extensive graveyards there. Of these, I visited no less than four on the island itself, and heard from natives of the existence of others in parts of the island I did not visit…” (Researches Among the Cyclades, 1884, p.47)

As to how this all came about is revealed in his wife’s ‘Chronicle’:

“Tuesday [1883, December 18th?]. Rode 1½ hour to the nearest point to Antiparos carrying only our night things and a card of introduction from Mr. Binney for Mr. R. Swan who has a calamine mine on this island. Crossed in about 10 minutes [from Paros]. Found the population all enjoying the feast of St. Nikoloas who replaces Neptune. At one house I was obliged to join in the syrtos holding 2 handkerchiefs. We sent a messenger to Mr. Swan and knowing he would take 3 hours to return, rode to meet him. Met Mr. Swan who more than fulfilled our warmest hopes. He took us to his house, and after resting told us that in making a road he had come upon a lot of graves and found a marble cup, broken etc. So, we manifesting a great wish to dig too, he got men and we opened 4. They were lined and paved with slabs of stone and the people must have been doubled up in them, they were so small; we only found, besides bones, 2 very rough marble symbols of men and women, little flat things and some broken pottery.” [The Travel Chronicles of Mabel Bent, vol 1, Oxford 2006, pp 21-2]

The Scottish engineer Robert Swan (1858-1904), and his brother John, were at that time working for a French mining company and were settled on the western coast of Antiparos around the site known today as Krassades – his house, where the Bents spent the night, having excavated some of the famous Cycladic figurines (which he sold to the British Museum) and the skeletal material, can still be seen. The next day (19th December 1883?) the Bents went back to Paros for Christmas and the New Year, not returning to Antiparos to undertake more excavations until 4 February 1884 (for three weeks). Mabel does not provide much information on this second campaign:

“… As I have been very lazy about my Chronicle, I will only say that there I stayed 3 weeks [February 1884], during which time we did lots of fishing, sometimes with dynamite, which is against the law and very dangerous, but the fishermen here did it… A good deal of grave digging was also done and a good many pots of earth and marble found, also knives of volcanic glass, little marble figures and a little silver one also, very rough, and some personal ornaments of brass and silver…” [The Travel Chronicles of Mabel Bent, vol 1, Oxford 2006, pp 45-6]

Altogether, Theodore Bent records having opened around 40 graves at two of the sites they explored, referring to Krassades as the ‘poorer’ (i.e. earlier):

“And now a few words about the graves themselves. In the first place those on the western slope are very irregular in shape: some oblong, some triangular, some square ; they generally had three slabs to form the sides, the fourth being built up with stones and rubbish. There was always a slab on the top, and sometimes at the bottom of the grave. They were on an average 3 feet long, 2 feet wide, and seldom more than 2 feet deep. In every grave here we found bones, chiefly heaped together in confusion, and most of the graves contained the bones of more bodies than one. In one very small grave we found two skulls, so tightly wedged together between the side slabs that they could not be removed whole.” [Notes on Prehistoric Remains in Antiparos, pp. 137-8]

“May 7, 1884. Skull from an ancient [cemetery?] found in the Island of Antiparos one of the Cyclades. An account of the excavations in which it was found is published by the donor in the Athenaeum for May 3rd 1884. Thought to belong to a period previous to the 16th cent. BC. Presented by Theodore Bent Esq, 43 Great Cumberland Place, W.” (RCS : Register of Accessions or Donations, 1862-1886,  Ref: RCS-MUS/3/1/6. © Royal College of Surgeons, reproduced with permission). In his famous book covering the two seasons (1883-4) he and his wife Mabel spent touring the region (The Cyclades, or Life Among the Insular Greeks, 1885), the young archaeologist makes a reference to having returned to London with the skeletal material uncovered on Antiparos and that a skull was donated to the Royal College of Surgeons, who briefly published it, according to the science of the time:

“The skull from the Greek tombs at Antiparos placed in my hands for examination by Mr. Bent is that of an adult male of middle age.” [‘Notes On An Ancient Grecian Skull Obtained By Mr. Theodore Bent From Antiparos, One Of The Cyclades’, by J.G. Garson, M.D., Royal College of Surgeons, in J.T. Bent ‘Notes on Prehistoric Remains in Antiparos’. The Journal of the Anthropological Institute of Great Britain and Ireland, Vol. XIV (2) (Nov 1884), 134-41; Biographical note:  ‘J.G. Garson, M.D., F.Z.S., Memb. Anthrop. Inst., Anat. Assist. Royal College of Surgeons, and Lecturer on Comparative Anatomy at Charing Cross Medical School’]

And that might have been that for this Early Cycladic individual, but the Bent Archive felt that he deserved more attention, and the Royal College of Surgeons was approached to see if they had any information on the subject. There was good and bad news – Yes, the skull appears in their registers [Register of Accessions or Donations, 1862-1886,  Ref: RCS-MUS/3/1/6], but, No, it was probably destroyed in the Blitz, when about a third of their collection was lost. But, their archivist continued, try the Natural History Museum, where some items had been transferred before the war.

Our approach to the Museum revealed that, indeed, the skull was there in South Kensington, and not just a skull, but another skull fragment, a pelvis, and also a considerable assemblage of ribs and assorted long-bones. This was a new discovery. Bent makes no mention of returning with such a large collection – and nor have the bones been catalogued or studied; indeed, without such study there is no way of knowing how many individuals are involved, nor from which site they came. We know that Bent made at least two investigations of burials sites on Antiparos, and Mabel Bent in her diaries also refers to finding bones on Paros and perhaps elsewhere. Without further research it is not possible to say whether all the material is from the significant and early Krassades site.

In the early summer of 2022, the Natural History Museum took the first ever photographs of the skulls and fragments of a pelvis, and have very kindly given their permission for us to reproduce the cranium mentioned by the excavator in his laconic footnote on page 409 of his 1885 monograph – “The  skull I  presented  to  the  Royal  College  of  Surgeons.” It has not been seen by anyone outside a museum drawer for almost 140 years, and very far from the sunny Cyclades.

Mabel Bent was to become the expedition photographer on the couple’s subsequent annual journeys to the Levant, Africa and Arabia, but not for the trip to the Cyclades, alas, or we might have been able to see the skull before in some way  (it is also rather strange, perhaps, that it seems never to have been drawn for any of Bent’s articles).

In any event, the artefact is respectfully presented here, and it is gratifying to bring this individual from an early Mediterranean culture to a wider audience for the first time (August 2022). Hopefully a project to sort, classify, and catalogue all the Natural History Museum Bent Collection material can be undertaken to see whether further scientific analyses might be appropriate: the last decade or so has seen considerable interest in the prehistoric past of the region (e.g. the work of Colin Renfrew et al. not far away at Keros and Daskalio, off Naxos).

We will keep you posted.

Bent, J.T. 1884. Notes on Prehistoric Remains in Antiparos. The Journal of the Anthropological Institute of Great Britain and Ireland, Vol. XIV (2) (Nov), 134-41.

Map of the scene

Read how to use the interactive map.